Barnes & Noble’s latest NOOK is now available for $119. The NOOK GlowLight is a bit lighter than its predecessor, has a higher-resolution display, improved screen refresh technology, and more storage.

). But the improvements help keep B&N’s hardware competitive with Amazon’s latest Kindle products… or at least competitive enough to keep folks who have been using NOOKs for the last few years from straying.

As for attracting new customers, that could be a bit tougher — although the 4GB of storage and presence in retail stores could help. 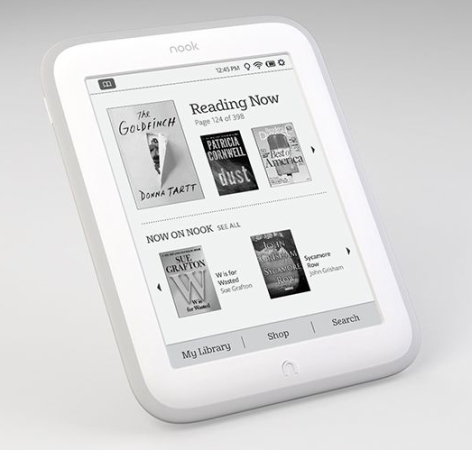 The new NOOK GlowLight sports a 6 inch, 1024 x 758 pixel E Ink Pearl display with Regal screen refresh technology which means that you won’t have to see the display fade to black while refreshing the page as often. The latest Amazon Kindle and Kobo Aura eReaders have the same technology.

The NOOK GlowLight weighs 6.2 ounces, which B&N points out makes it 15 percent lighter than a Kindle Paperwhite. It’s also a bit thinner and lighter than the 7.5 ounce, 0.47 inch thick NOOK Simple Touch.

The NOOK GlowLight gets up to 8 weeks of battery life (if you read for about a half hour per day with the WiFi turned off and the GlowLight turned off or adjusted to its default brightness settings.

One of the main things that continues to set NOOK eReaders apart from Kindles is support for digital books in the EPUB format. But with Amazon dominating the eBook space these days, that might not be as big an advantage as it was a few years ago.

Another thing that helps set it apart for some folks who like to tinker may be the fact that the NOOK GlowLight software is based on Android 2.1 Eclair, which could make the device a bit more hacker-friendly than a Kindle or Kobo device (although that’s not exactly something B&N encourages.

A feature that used to help set B&N’s eReaders apart from Amazon’s was the inclusion of SD card slots for extra storage. But the NOOK GlowLight is the first NOOK device to ship without support for removable storage. The company also did away with hardware buttons for turning pages. You’ll have to use the touchscreen to flip digital pages on the NOOK GlowLight.

via B&N press release and The Digital Reader