Acer’s latest Chromebook is a thin and light Chrome OS laptop with longer battery life and a faster processor than any model the company’s released to date.

The Acer C720 Chromebook is powered by an Intel Celeron 2955U Haswell processor and Acer says the computer should be able to get up to 8.5 hours of battery life. 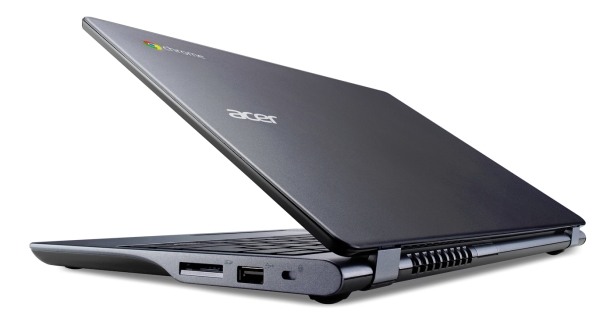 Acer says additional models will be available in the coming weeks, and that could include the touchscreen model we’ve been hearing about.

But at $250, the Acer C720 already looks like a pretty compelling option. It has twice the RAM, a few hours longer battery life, and a faster processor than the HP Chromebook 11, for instance — and that model sells for $280.

One thing HP’s laptop has going for it is size: it measures just 0.7 inches thick and weighs 2.3 pounds, while the Acer C720 is 0.75 inches thick and 2.76 pounds. It’s not exactly heavy, but it’s not as light as some competitors.

Chromebooks haven’t entirely cornered the market on cheap laptops, but over the past year or two we’ve seen a number of compelling Chrome OS laptops that are cheap, portable, and fairly capable machines — as long as you don’t mind using an operating system that’s designed around a web browser and which works best when you have an internet connection.

Chrome OS isn’t for everyone, but it’s a sort of more-is-less approach toward computers. Instead of filling up a PC with bloatware that can slow down performance, Chrome OS users primarily run web apps. Security and feature updates are pushed automatically. And since most of your data and settings are stored online, if you lose a Chromebook or want to replace it for another reason, all you have to do is sign into a new model with your Google credentials and you’ll be back to where you left off in a matter of minutes.