Straight Talk and Net10 are pre-paid wireless providers that offer relatively inexpensive talk, text, and data plans in the United States. Bring an AT&T or T-Mobile compatible phone to one of these carriers, and you can get service for as little as $45 per month (or even less if you pay for 3 months or more in advance).

Up until recently, both services said they offered “unlimited” talk, text, and data. But users noticed that their internet speeds became very slow after hitting an unspecified limit. Now the company that owns Straight Talk and Net10 is clarifying exactly what “unlimited” means.

Customers get up to 2.5 GB of high-speed data. After that, service will be throttled down to 2G speeds until the end of the billing period. 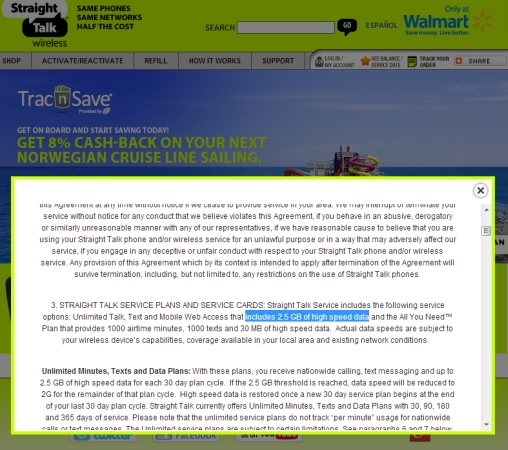 That’s actually a pretty good deal. Most US wireless carriers charge significantly more for that much data, and technically the plans are still unlimited. It’s just the high-speed data that capped at 2.5GB per month.

It also comes after a class action suit was filed against Straight Talk and Net10’s parent company Tracfone this summer, alleging that the company’s claims that it was offering unlimited data were false, since it was throttling users’ connection speeds after a certain, unspecified cap had been met.

I’ve been a Straight Talk customer for a little over a year, and I’ve been pretty satisfied with the service. You may not be able to walk into a store for customer support, and you’ll have to pay full price for your phone up-front. But over time this type of service can save a lot of money, and since the carriers operate on AT&T and T-Mobile’s network, coverage and performance is pretty good throughout the country.

Update: Wondering what you can do with 2.5GB of data? Straight Talk says that’s enough to view about 2,100 web pages, stream music from Pandora for 88 hours (or more than two full work-weeks), browse Facebook for 128 hours, or check about 35,000 emails. Meanwhile, the company advises staying away from YouTube, Hulu, netflix, and other video streaming and download services while you’re on 3G or 4G, since online video apps are “data vampires.”