Flash memory and solid state drives offer a number of benefits over a traditional hard drive. SSDs and flash memory have no moving parts so they generate less heat, make less noise, and can be much harder to break than a hard drive with spinning platters. In many cases, SSDs are also faster than hard drives.

But there’s one area where hard drive technology still wins: It’s much cheaper. So if you want fast, sturdy storage, an SSD is the way to go. If you want a lot of storage, a hard drive or hybrid drive can be a better option… for now.

While hard drives are still quite popular in desktop and laptop computers, flash memory dominates the mobile space. But Seagate sees an opportunity to change things by offering a solution that would let tablet makers offer users 500GB of storage for music, movies, games, and other content. 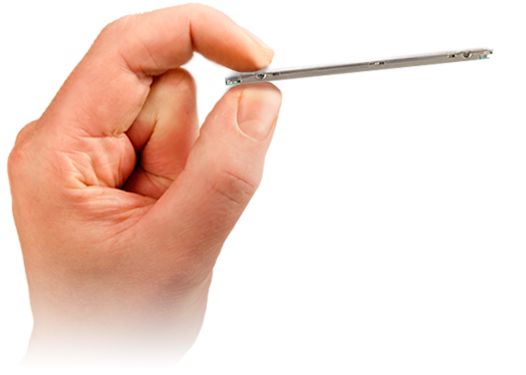 Seagate already offers laptop hard drives that are only 5mm (less than 0.2 inches) thick. Now the company wants to make one of those drives available for tablets as well.

The Ultra Mobile HDD is a super-thin, 500GB hard drive that has 8GB of flash cache. The cache storage can help speed up boot times, multitasking, and other performance areas. But it’s the 500GB of storage that would set tablets with this drive apart from pretty much anything else on the market.

Seagate hasn’t said when its tablet drives will be available or if any tablet makers have committed to using them. But this wouldn’t be the first time we’ve seen Android tablets with hard drives.

The Archos 101 Gen9 tablet was available with a choice of flash storage or a 250GB hard drive, but there was no hybrid options available which would offer both flash memory and hard drive storage the way Seagate’s drives will.

Seagate says its Ultra Mobile HDD kit for tablets would allow device makers to offer more storage without sacrificing battery life. The drive is also pretty light, at just 3.3 ounces, which means that it would add some weight to a tablet, butnot very much.