Apple may be the only company offering smartphones with 64-bit processors right now, but Apple won’t be alone for long. Samsung says it’s next-generation phones will also have 64-bit chips. 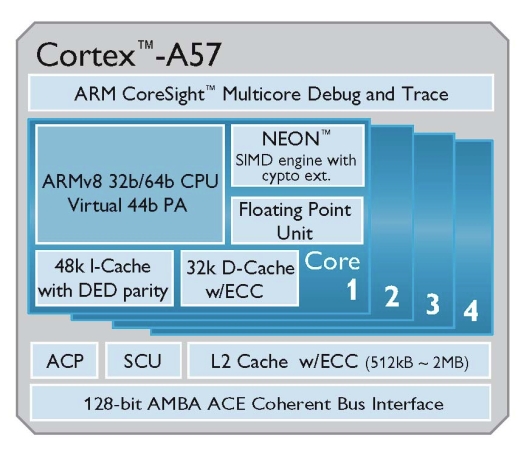 The Korea Times reports Samsung is working on 64-bit chips, and that they should be ready in time for the company’s “next smartphones.” While Samsung introduces an awful lot of phones over the course of a year, I think it’s safe to assume we’re talking about the next-generation of the company’s flagship Galaxy S or Galaxy Note phones, and it could be close to a year before those are ready to go.

Samsung probably isn’t the only company working on a move to 64-bit processing. Chip designer ARM is already licensing ARM Cortex-A57 and other 64-bit ARMv8 designs to companies interested in making chips based on the technology.

The iPhone 5S is the first phone to feature Apple’s new A7 chip, which is 64-bit ARM-based processor. For now, that probably won’t actually mean very much in terms of day-to-day performance. But it paves the way for big advances in the future.

One of the key limitations of the 32-bit chips found in most of today’s smartphones is that they can’t handle more than 4GB of RAM. A 64-bit processor can theoretically support up to 16 exabytes of data.

But the iPhone 5S probably won’t actually have more than 4GB of RAM, so Apple’s move from 32-bit to 64-bit is more about paving the way for future devices than it is about improving performance in today’s smartphones.

It’s likely that the Apple A7 chip has other improvements that will make it faster than the company’s year-old A6 chip, but it will probably only really be twice as fast when running certain apps designed to take advantage of the way 64-bit chips can process tasks, so you may see a bit of improvement in some resource-intensive tasks.

On the other hand, apps written for 64-bit systems tend to be larger than those designed to run on 32-bit chips, which means that if you buy a phone from Apple, Samsung, or anyone else and it has a 64-bit chip, you might want to consider investing in a model that has a reasonable amount of storage space for apps.

Update: As Google’s Jean-Baptiste Quéru notes, one important part of Apple’s sticking a 64-bit CPU into the iPhone 5S is that it’ll likely have a longer useful lifespan than the iPhone 5C or any other iOS devices on the market. At some point (probably in about two years if Apple’s current release cycle is anything to go by), Apple will stop making new iOS devices with 32-bit chips, and the next version of iOS probably won’t support 32-bit processes anymore.

In other words, while the iPhone 5S is a bit faster than its predecessors, the biggest reason to buy one now is if you expect to stick with Apple’s mobile platform for at least a few years and want to make sure you can continue to run the latest Apple software for at least a few more years.