There’s a rumor going around that NVIDIA plans to launch a tablet under its own brand name. If true, it would be the second consumer electronic device from the CPU and graphics chip maker.

Now the folks at ChinaDIY claim to have gotten their hands on a 7 inch tablet with an NVIDIA Tegra 4 processor and the Tegra Note name on the back. It’s not entirely clear if this is actually a finished product, a prototype, a fake, or a reference design for device makers interested in following NVIDIA’s recommendations for building their own tablets with NVIDIA chips. 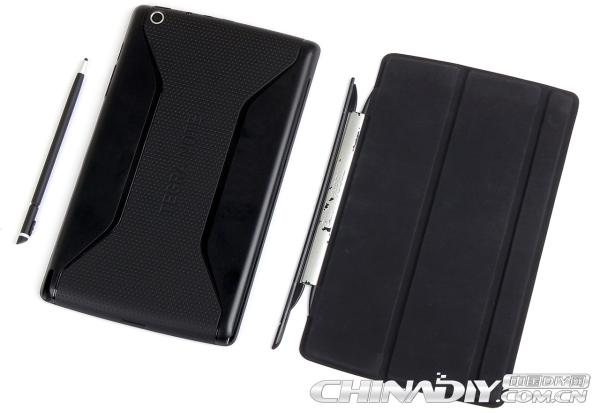 While NVIDIA has typically only produced chips used in products built by other companies, NVIDA released its first consumer device this year in the form of the Shield handheld game console.

The experience may have convinced NVIDIA that the best way to move its chips it to build hardware that uses those chips — although HP, Toshiba, and other companies have also already brought Tegra 4-powered tablets to market this year.

According to ChinaDIY, the tablet has a black plastic shell, stereo front-facing speakers, and another speaker which could be some sort of subwoofer.

There’s also a stylus which you can tuck away into the slot in the back of the case — but it’s a simple capacitive stylus. This tablet doesn’t have an active digitizer for pressure-sensitive input.

The Tegra Note tablet has a 5MP rear camera with auto-focus, a front-facing camera, microUSB and micro HDMI ports, a 3.5mm audio jack, a microSD card slot, and a protective cover which looks a bit like an iPad Smart Cover.