The first tablets featuring Intel Atom Z3000-series Bay Trail processors are due to hit the streets in the coming months. And if early benchmarks are anything to go by, they’re going to offer significantly better performance than any Atom-powered devices to date.

The folks at AnandTech spent a few hours with a test unit featuring an Atom Z3770 quad-core processor, 2GB of RAM, and a 10 inch, 2560 x 1440 pixel display, and they came away impressed with both the performance and the power consumption.

In a nutshell, it looks like Intel’s new chips will offer performance that’s on par with AMD’s Kabini processors, but significantly lower power consumption. While there are more powerful chips on the market, Bay Trail processors will likely hit a sweet spot between price, performance, and power consumption, resulting in tablets that cost less than $500, offer 8 hours of battery life, and performance that’s about as good as a mid-range laptop from a few years ago. 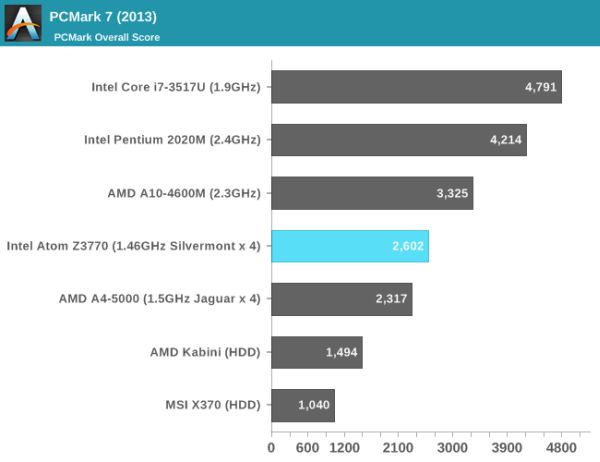