The new chips, code-named “Bay Trail” will show up in Android and Windows 8.1 tablets in the coming months, and Intel says some of those tablets could have prices as low as $199.

In other words, the Atom Z3000 is the chip that Intel is hoping will make Windows RT tablets obsolete.

As expected, Bay Trail T chips should be up to twice as fast as the Clover Trail chips available in current tablets such as the Acer Iconia W3, Samsung ATIV Tab 3, or Lenovo Miix 10.

At the same time, the new chip runs cool enough to be crammed into a thin, fanless tablet case. Intel says Bay Trail tablets should be able to get more than 8 hours of battery life.

Unlike Windows RT tablets with ARM-based processors which get similar battery life, a Windows 8.1 tablet will be able to run both full-screen, Metro-style apps and desktop Windows apps including software written for earlier versions of Windows.

But that doesn’t mean Bay Trail is a Windows-only platform. Intel has also made sure that Google Android can run on the platform, and it’s likely that some of the lowest-cost Bay Trail tablets will use Google’s operating system. 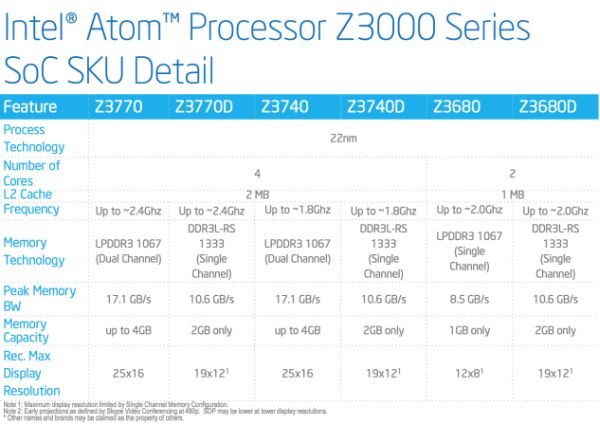 Intel will offer dual-core and quad-core versions of its Bay Trail chips, including the Atom Z3770 quad-core processor that’s been popping up in benchmarks in recent weeks. Among other improvements, Bay Trail adds support for out-of-order execution, which should make these next-generation Atom chips the fastest yet. They still won’t exactly offer Haswell-like performance, but it looks like Intel’s new Atom chips are faster than AMD’s Kabini processors, but consume less power. And after 5 years of modest updates, it’s nice to see a major leap in performance for Intel’s Atom chips.

Bay Trail chips will run at speds up to 2.4 GHz, support up to 4GB of RAM, and will feature Intel HD graphics with support for DirectX 11, OpenGL ES 3.0, 4K video playback, and screen resolutions as high as 2560 x 1600 pixels.

Intel’s Atom chips won’t be the company’s only processors aimed at low-power tablets and other devices. The company also introduced a new low-power Core i3 Haswell chip aimed at a similar space, but designed to offer higher performance… at a higher price. The Bay Trail T chips are aimed squarely at the budget tablet space.

In addition to launching new Bay Trail chips for tablets, Intel is unveiling Bay Trail M processors for low-power notebooks. These chips will be marketed under the Celeron and Pentium brands, and Intel says they’ll show up in notebooks that measures as thin as 0.43 inches, weigh as little as 2.2 pounds, and offer price tags as low as $199. Models with touchscreens are expected to start at $250, and detachable tablet-style notebooks are expected to start at $349.