Clues about Amazon’s upcoming Kindle Fire HD refresh — like its 1080P display — have already trickled out. Now, there’s a set of leaked images to go along with the hardware specs.

BGR got its hands on a handful of photos of the new 7-inch model, and its sources report that the 8.9-inch version is almost identical. The front of the new Kindle Fire HD isn’t all that different — it’s still a black slab with rounded corners and still looks a bit like a BlackBerry PlayBook. 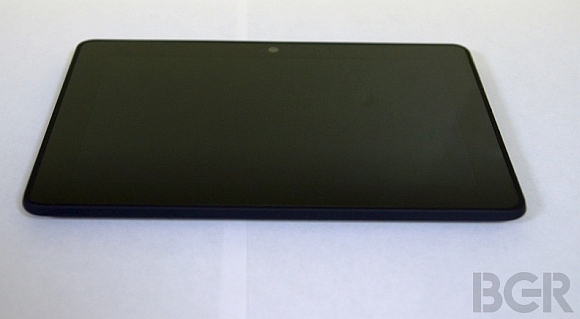 When it’s flipped over, however, the changes are much more obvious. The edge has been chamfered all the way around, and it reportedly makes the tablet more comfortable to hold. The Kindle Fire HD’s physical volume and sleep/wake buttons have been moved onto its angled edge, which should make them easier to reach while holding the tablet. The speakers have also been moved up and now sit along the same edge as the webcam.

What other secrets lurk beneath the redesigned exterior? It’s been reported that the new Kindle Fire HD features a 2GHz-plus quad-core Snapdragon 800 SoC and 2GB of RAM. The 8.9-inch model gets beefed up with a 2560×1600 pixel display (339ppi, much more dense than the current iPad), and you’ll be able to choose 16, 32, or 64GB of internal storage for both Kindle Fire HDs.

The new tablets will also arrive with a more current version of Android under the hood. They’ll ship with Android 4.2.2 buried deep beneath Amazon’s customizations.