HP’s newest Spectre 13 ultrabook is just as thin and gorgeous as previous models in this line but should have better battery life and graphics performance, as well as a higher-resolution display and a remarkably wide touchpad.

The HP Spectre 13 with an Intel Haswell processor will be available for pre-order on October 16th and starts at $999. 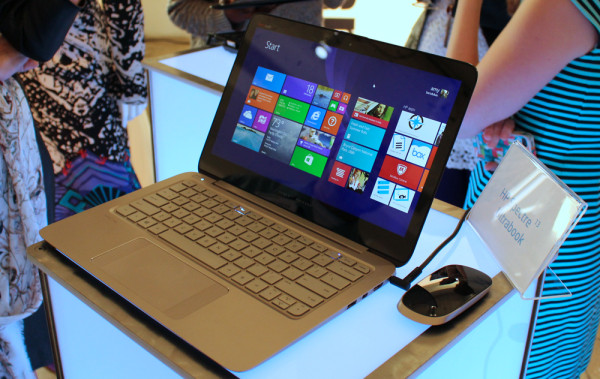 The Spectre 13 is a beautiful machine. The matte-finished, all-metal chassis sports an elegant truffle brown color on the lid and bottom and a champagne color on the inside. It’s just enough flash to make the ultrabook stand out on the shelf or on your desk while remaining tasteful and understated enough to come to work with you. Coming in at just under 3.3 pounds, the Spectre doesn’t sully the ultrabook name by being too heavy. According to HP it’s a respectable 13.4mm thin as well.

After the aesthetics, the first thing you’ll probably notice is that this ultrabook has an ultra wide touchpad. 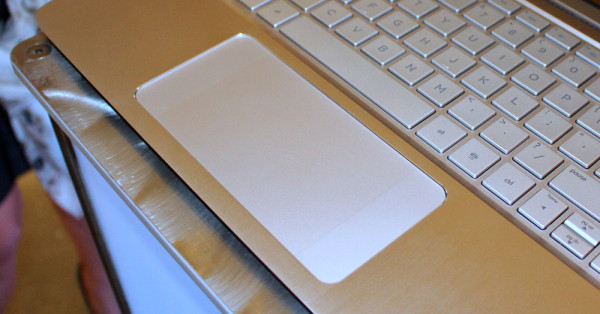 HP dubbed this the Control Zone trackpad for the extra bits on the right and left. These are designed to make bringing up the Windows 8 charms easier–instead of swiping/flicking from the left or right, now you can just click. And the zones are scrollable. Just click, then slide your finger up or down to select the charm or app you want.

The Control Zones are both a different color and different texture from the main touchpad area so you’ll always know if your finger strays too far. This should also help eliminate accidental charm activation. The zones also work as just regular trackpad surface area and there are more custom gestures beyond the basic ones.

I’m down with the idea behind this, but more because I like a really wide touchpad. And in my short time playing with the notebook the touchpad worked as advertised. Getting everything right the first time requires precision (where to click, exactly) and it took a minute to get the hang of things. The touchpad itself gave me no trouble. 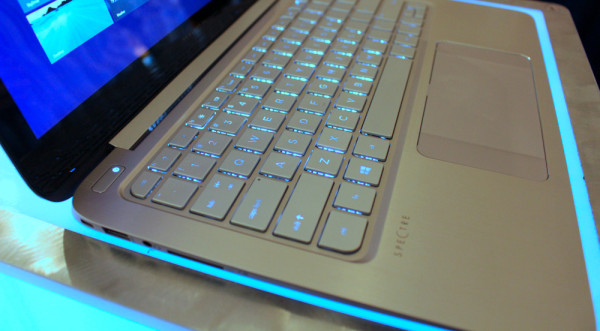 The ultrabook has a decent backlit keyboard and offers good travel and tactile feedback. The lighting is really bright and a bit overwhelming, something else I’m used to with HP laptops.

The Spectre 13 has a full HD resolution touch display. Though glossy, viewing angles are wide. Plus, the screen looked plenty bright in the demo area. It’s responsive and doesn’t collect fingerprints too readily. Same goes for the machine as a whole.

Inside, a 4th generation Intel Core i5 processor runs the show. Full specs aren’t yet available, but expect a Core i7 option and at least a 128GB SSD. Port-wise you’ve got two USB 3.0 ports, HDMI, DisplayPort, and an SD card slot. HP rates the Spectre at 9 hours of battery life. That’s great for a 13-inch system and made possible by the Haswell CPU.

The HP Spectre 13 looks to be the ultrabook to beat this holiday season. It’s everything one expects from the category–attractive, thin, and light–plus the stuff you want from any laptop–long battery life, good keyboard and display–and an extra fancy touchpad on top of that. If all of this appeals to you but you’re a hybrid laptop/tablet kind of person, check out the HP Spectre 13 x2. It’s almost identical to this minus the wide touchpad.

One reply on “HP Spectre 13 hands-on: Ultrabook with an ultra wide touchpad”