The HP Spectre 13 x2 hybrid ultrabook/tablet gets the distinction of being the first fanless, ventless Haswell convertible, which is an achievement considering how thin it is.

It will be available for pre-order October 16th, releasing soon after that, and will start at $1,099. 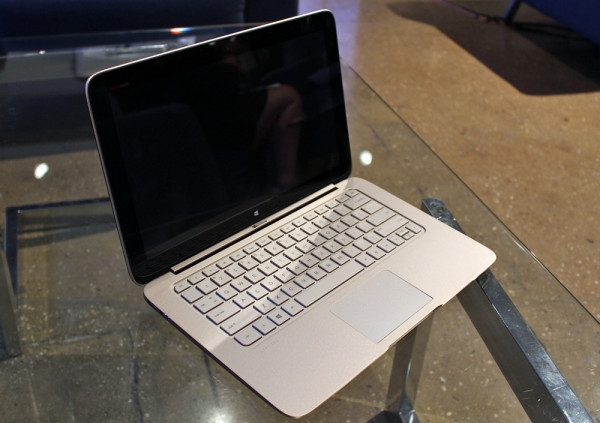 The hybrid version looks a lot like the regular ultrabook Spectre 13 (coming soon for $999), and I have no complaints about that. Both feature metal chassis with a truffle brown color on the lid and champagne color on the inside. The material thankfully doesn’t collect fingerprints too readily thanks to the matte finish. The Spectre x2 is thin, as you’d expect, and around 4.5 pounds when connected to the base. A 13.3-inch tablet isn’t as portable or wieldy as a 7 or 10-inch one, but at least the balance is good.

The display is full 1080p HD resolution and offers wide viewing angles (despite the glossiness) and good brightness levels. During my hands-on time the tablet stayed cool, though no one was taxing it much. Still, the prospect of a Windows 8 tablet that stays cool and quiet yet offers full performance is very tempting.

As with all the other x2 devices from HP, the keyboard base includes an extra battery and adds ports. The tablet itself only has a microSD card slot. The base adds two USB 3.0 ports, full HDMI, and a full SD card slot. The base and tablet portions balance each other well — when connected, it feels like a laptop should and you get a wide range for positioning the display. That makes the whole thing overall heavier than a non-hybrid laptop, which is the trade-off you sometimes have to accept with hybrids.

The hinge/locking mechanism remains solid. It’s really easy to detach/attach and the Spectre doesn’t give you a reason to worry about it coming apart if you carry it around by the screen.

My short test of the keyboard satisfied me that it’s your standard HP keyboard with decent tactile feedback and travel. The backlighting is somewhat aggressive, per usual, but you can never say the keys aren’t visible in any kind of light. The touchpad is also pretty standard HP ultrabook: clickpad, U shape, good feel on the surface. In my short hands-on time I didn’t note any performance issues with jumping or lack of responsiveness.

HP hasn’t yet released the full specs on the Spectre 13 x2. Expect at least a 128GB SSD at the base price, Core i5 and Core i7 CPU options, some better than average (for Intel) graphics performance, and Beats Audio.

Overall, this hybrid ultrabook is pretty slick and should tempt those of you who go for this type of machine. However, if you’re leaning more toward an ultrabook only, the other Spectre 13 looks sweet as well. HP also announced a Pavilion x2 hybrid with an 11.6-inch display. Aimed more for the mainstream, it’s not as sleek as the Spectre x2.