Chip maker Freescale plans to launch a few new lines of ARM-based processors in the next 18 months. The upcoming Freescale i.MX 7 and i.MX 8 chips will both be based on 28nm designs and they’re targeted at embedded applications such as point-of-sales systems or in-vehicle systems.

The company doesn’t have much to say about tablets, but that’s not surprising. Freescale’s i.MX6 processors have been around for a few years at this point, but they’ve never been particularly popular with makers of tablets or related consumer devices. 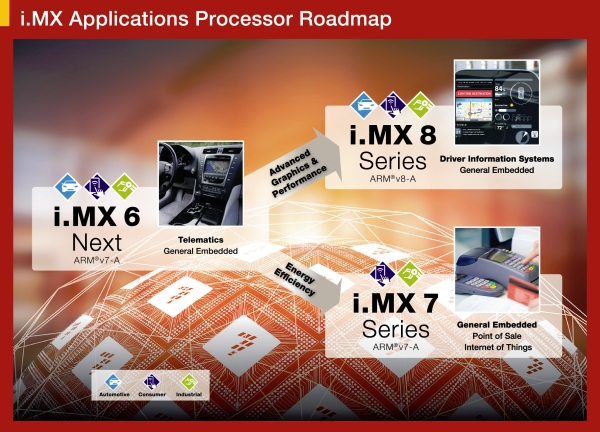 One of the things that Freescale is known for, though, is offering a lot of documentation about their processors, which means that the few Android tablets and TV boxes that have been released with the company’s chips tend to be about as Linux-friendly as any ARM-based devices (with the possible exception of the Rasberry Pi and the upcoming Vivaldi Flying Squirrel tablet).

While Freescale’s chips don’t typically offer the kind of performance you’d see from the latest Samsung, NVIDIA, or Qualcomm processors, the company’s chips are usually low-cost and energy-effiicent.

Freescale processors, for example, are among the most popular chips for eReaders such as the Amazon Kindle and Kobo line of readers with E Ink displays.

The new i.MX 7 and i.MX 8 chips, as well as a next-generation i.MX6 processor family will be aimed at more resource-intensive applications such as communications and media systems rather than simply flipping pages in digital books.