The Raspberry Pi is an inexpensive computer designed for education and DIY purposes. For about $35 you get a tiny device with a processor, memory, input and output, and a memory card slot. Just insert a flash card, keyboard, and display and you’ve got a full-fledged computer.

Folks have also found ways to make the Raspberry Pi more portable by turning it into a laptop or handheld game console.  Now you can also build a Raspberry Pi-powered tablet. 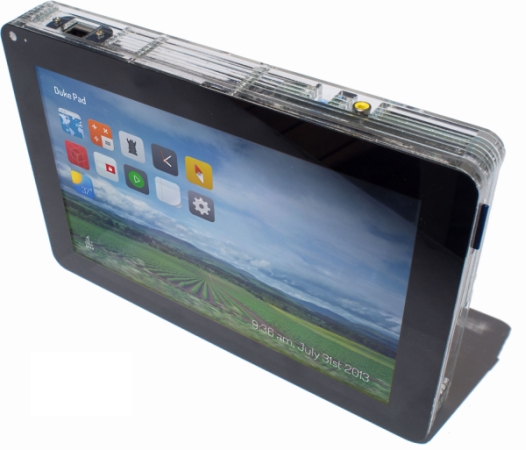 The DukePad is a set of DIY instructions for building a tablet that uses a Raspberry Pi as its brains. The instructions include a list of hardware you’ll need to purchase, designs for a laser-cut case, and steps for setting up a software environment using Raspbian Linux and Java to give the Raspberry Pi a touch-friendly operating system and user interface.

If you were hoping to save some money by building a DIY tablet instead of buying one that’s already configured, this project isn’t for you. The parts alone will set you back more than $350 — and that’s before you find someone with the hardware to cut the acrylic case for you.

Instead, this sort of project is for folks who like the idea of building something with their own hands, and having more control over the finished product than you would if you bought a tablet running Android, iOS, or another existing operating system.

The folks behind the DukePad project are looking into assembling pre-built kits, but they’re not yet available.