is a 7 inch tablet with a 1280 x 800 pixel display and a starting price of just $139. It’s basically the same model the company was selling last year for $199, but it’s now one of the cheapest high-quality tablets around, selling for less than a Google Nexus 7, or many Chinese tablets with less name recognition. 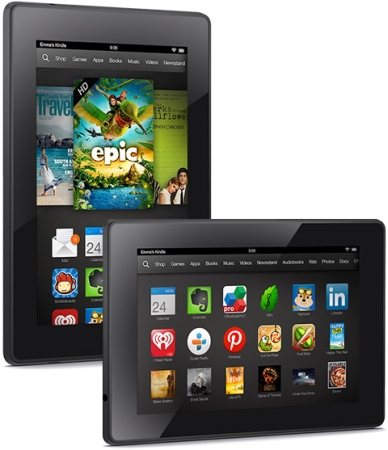 Amazon’s new tablet comes with Fire OS 3.0 “Mojito,” which is based on Google Android, but which includes Amazon’s user interface and many other tweaks including integration with Amazon’s app, music, and video stores, connection to Amazon’s Cloud storage and synchronization services, and more.

Most importantly, the Kindle Fire HD 7 is $90 cheaper than a Google Nexus 7, about $190 cheaper than an iPad mini, and still offers a reasonably good experience for reading books, surfing the web, playing games, and much more.

It can run thousands of Android apps, and if you happen to be locked into Amazon’s digital content ecosystem (or are willing to lock yourself in), it’s designed to work with  Amazon’s digital media services.

Prices start at $139, but if you want a model with 16GB it’ll set you back $169. You can also pay $15 more to remove “special offers,” which are ads that show on the home screen and lock screen.

Now that Amazon’s Kindle Fire HD has an entry-level price, the company is done selling models without HD screens. The original Kindle Fire and Kindle Fire 2 were the only Amazon tablets to ship with 1024 x 600 pixel displays, and they’re now things of the past (although you can often find dirt cheap models on eBay).