Google is starting to roll out an update to its YouTube app for Android. It brings a new card-based user interface that looks a bit like Google Now. That’s not surprising, since most of Google’s Android apps are getting card-style makeovers.

But what is a big departure from tradition is support for shrinking the video window and continuing to watch while you navigate YouTube to find more videos, read comments, or perform other actions. 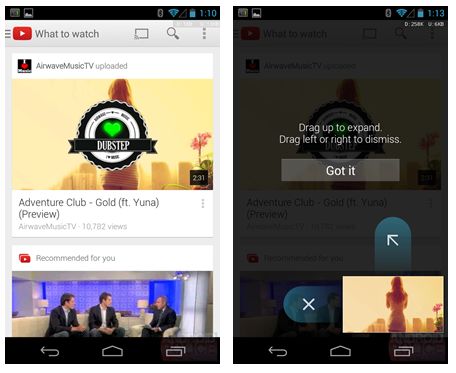 It doesn’t look like you can keep the video playing while you’re running other Android apps. To do that you’ll probably need a custom version of Android with multi-window support such as a recent Samsung Galaxy device or a Rockchip tablet like the Chuwi V88.

But this is the first time we’ve seen Google officially support resizeable video windows — and it could be a sign of how multi-tasking could eventually work in future Google apps or Android updates.

The YouTube v5.0 app should eventually roll out to most Android users. But if you haven’t gotten the update yet, you can find a download link (and more screenshots) at Android Police.

The site reports there’s also a new app icon, a new user interface for landscape orientation on 7 inch tablets, and other improvements.