The Moto X should be available from most US wireless carriers starting in late August or early September for around $200 with a 2-year contract. 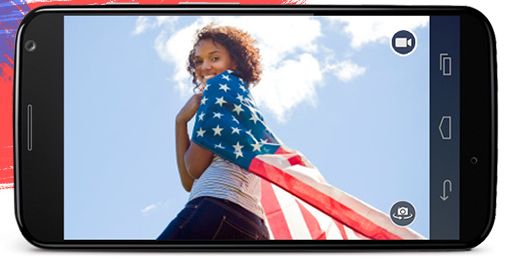 If you just look at the basic specs, the Moto X looks like a mid-range phone. it has a 4.7 inch, 1280 x 720 pixel display, a Qualcomm Snapdragon S4 Pro quad-core processor, 2GB of RAM, and 16GB to 32GB of storage. It runs a pretty much stock version of Android 4.2.2 Jelly Bean, and there’s no microSD card slot.

Customers do get 50GB of free Google Drive cloud storage space for 2 years though. Normally you can only get up to 5GB of space for free (although Chromebook Pixel customers get 100GB for 2 years).

But there are a number of features which help set it apart. It has a fairly hefty 2200mAh battery, a 10MP rear camera and 2MP front camera, and Motorola’s X8 Mobile Computing System with dedicated hardware for processing natural language and information from the phone’s many sensors.

A bigger difference between the Moto X and almost any other phone on the market is the way you interact with it. While you can pick up the phone and use it like any other touchscreen-enabled smartphone, you can also just talk to your phone while it’s lying on your desk, hanging out in your car dock, or sitting next to you on the couch.

That’s because the mic triple-mic array with noise cancellation lets you talk to the phone from up to 15 feet away, and you can leave the mic always on. That means you can talk to your phone without taping a button, or even unlocking your phone (although not all commands will work when the phone is locked). By default the always-on capability is disabled to extend battery life (and presumably to appease privacy advocates who don’t like the idea of Google constantly listening to you).

Voice controls work with Google Now to let you ask questions or launch certain actions, but Google Now requires an internet connection. So you’ll need a WiFi or cellular data connection for it to work.

Another way you can use your phone without turning it on is by just looking at the screen when the phone is in standby. That’s because the AMOLED display can power up just portions of the screen while the rest is off, so you can see notifications, time, or other details without even turning the phone on. 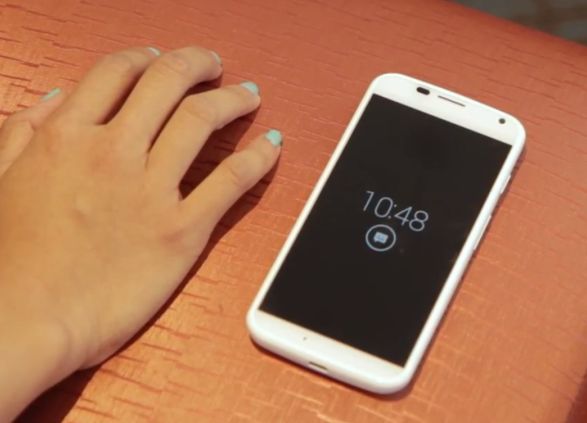 All you have to do is pick up the phone to see the time. You don’t have to unlock it every time you pull it out of your pocket.

Motorola’s answer to HTC’s “Ultrapixel” technology is called “Clear Pixel.” In a nutshell, Motorola says it captures about 75 percent more light than a typical smartphone camera, which allows you to snap better pictures in low-light settings.

HTC went with a 4MP camera in the HTC One smartphone in order to do something similar. The Moto X has a 10MP camera.

You can also open the camera app without tapping a button to load the app. Just twist your wrist twice and then tap anywhere on the screen and it’ll snap a photo.

Motorola promised that you could design your phone yourself — and there’s a website to prove it. It’s called Moto Maker, and it’s a site where you can pick the colors for your phone’s backplate and other color accents. You can also choose a white or black front panel for your phone.

At launch, Moto Maker will only be available for AT&T customers in the US.

Customers also get to choose whether to go with a 16GB or 32GB phone, whether to add an official case, or other accessories. And if you’d like to have more input, Motorola plans to run polls on Facebook to get feedback from users about what new colors and styles users would like to see.

I suspect a lot of folks will complain that they don’t care what color their phone is, as long as Motorola adds a microSD card slot.

The Moto X should be available in the next month or two from AT&T, Verizon, Sprint, T-Mobile, and US Cellular for $199 and up on contract.

When you buy the phone from carriers, you won’t get an Android skin like Motoblur, TouchWiz, or Sense. But you may get apps pre-loaded by the carrier.

Soon you’ll also be able to get a Google Play Edition of the phone which comes without any added software. That model will also get software updates straight from Motorola, while the carrier will have to go through a carrier approval before OS updates can be delivered.

Pricing hasn’t yet been revealed for the Google Play edition.

Motorola will also offer a developer edition with an unlocked bootloader for a price that also hasn’t yet been announced.

24 replies on “Motorola launches Moto X smartphone, promises you can use it without touching it”