Straight Talk is MVNO, or mobile virtual network operator. That means the company acts like a phone company, but it actually sells you air time on someone else’s network — typically at a much lower price than you’d pay if you went straight through that larger network.

Up until recently, Straight Talk allowed customers a choice of “unlimited” data plans on AT&T or T-Mobile networks, but a little while ago the company ran out of AT&T SIM cards. Now they’re back, which means if you’re in an area where AT&T offers faster or more reliable coverage than T-Mobile you might be able to get yourself a $45 per month all-you-can-eat plan.

There are a few catches: Straight Talk supports HSPA+ but not LTE. And it calls its plans unlimited, but will actually start throttling your speeds if you go over a certain unspecified amount of data in a limited time. If you use less than a few hundred megabytes per day and less than 2GB of month, you can probably save a lot of money with this sort of carrier. 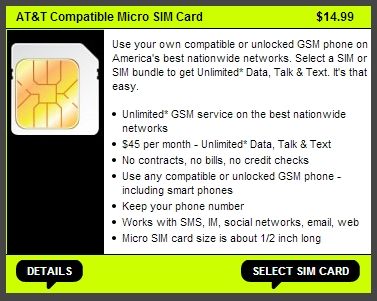