Smartwatches seem to be all the rage these days, blurring the lines between a smartphone and a wristwatch. But just because there’s not a lot of room in a wrist-sized computer doesn’t mean you can’t have a few high-end specs.

Swiss company Hyetis  is working on a watch with a 41MP camera, WiFi, Bluetooth, NFC, GPS, a color touchscreen display, and mechanical watch hands. The Hyetis Crossbow is a fancy Swiss watch which is designed to interact with your smartphone without taking it out of your pocket.

Luxury doesn’t come cheap though — the phone is expected to go up for pre-order soon for $1200, and only 500 limited edition devices will be offered when the watch ships later this year. 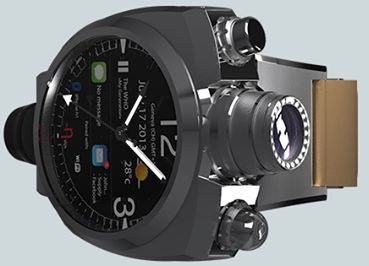 The stand-out feature is probably the 41MP camera, which hangs out just over the 12:00 point on the watch. It features a Zeiss optical zoom lens and integrated flash. There’s also a mic with noise reduction, so in addition to snapping very high resolution photos, you can shoot video and record audio.

The Hyetis Crossbow is designed to pair with Android, iOS, or Windows Phone 8 devices so you can share photos or perform other actions.

Mechanical watch hands give the Crossbow a classic wristwatch look, but the digital display under those hands lets you change watch faces. The watch will also continue to tell time even if the batteries are dead, thanks to “automatic wound movement.” Charging the batteries should be pretty easy thanks to an inductive charging pod for wireless charging.

And if you’re wary of spending $1200 on a device that hangs out on your wrist and is subject to scrapes and scuffs, the Crossbow is a sturdy device made of titanium and scratch-resistant sapphire glass with an anti-glare coating.

After the initial 500 units are sold, Hyetis hopes to offer new customizable versions of the watch. The Crossbow is also designed to be upgrade-friendly, letting you upgrade the electronic components of the watch while keeping the frame and mechanical bits — but if the watch itself sells for $1200, I doubt upgrade kits will come cheap.

via Android Police and +Mike Elgan