Like the idea of Google’s Chromecast, which lets you stream internet video to your TV, but don’t want to buy another device that only does one thing? Developer Sebastian Mauer has released a free app called Cheapcast that turns your existing Android device into a sort of Chromecast.

Fire up the app on your phone, tablet, or Android TV box and you can use a different Android device on your home network to stream videos to the device with Cheapcast installed.

In other words, if your tablet has HDMI output, just plug it into your TV, fire up the YouTube app on your phone and you can use it to send videos to your TV. If you already have an Android TV box, this app could virtually eliminate (almost) any reason to spend $35 on a Chromecast. 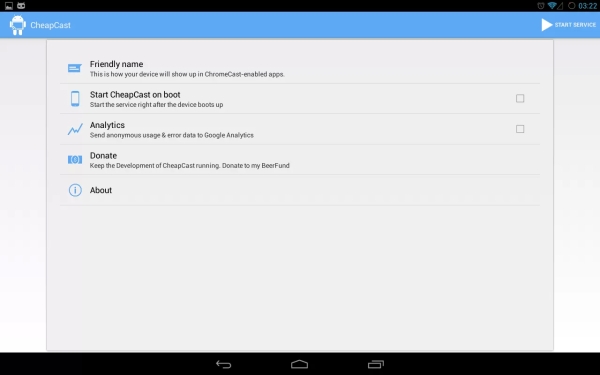 Right now Cheapcast is very much a work in progress. Like a Chromecast, it lets you select audio or video from supported apps on an Android phone or tablet and send it to a second display.

The media actually streams straight from the internet, not from your phone or tablet — and that means you can start a video and then exit the video player to surf the web or use other apps while the video continues to play. When you want to pause , rewind, or skip ahead you can return to that app or access the Chromecast controls on your phone or tablet from the Android notification tray.

But Cheapcast doesn’t currently support streaming the contents of a Chrome browser tab from a PC to your TV, something that you can do with Google’s official Chromecast.

In my tests, I also ran into problems getting Google Play Movies or Netflix to work with Cheapcast, but YouTube worked pretty much perfectly.

Since Google introduced the Chromecast, I’ve heard a lot of folks who already have Android TV boxes suggest that an $80 device like the T518 I used to test Cheapcast are a better bargain.

Why spend $35 on a device that is only a pass-through for internet video when you could spend a little more and get a box that can run almost any Android app, bringing Netflix, Hulu, YouTube, Crackle, and other internet video sources to your TV? You can also use a TV box to surf the web, play games, and more.

The answer is that the Chromecast is a much simpler solution. It boots incredibly quickly, lets you use your existing phone or tablet as a remote control, and you don’t have to navigate through home screens, app launchers, and other items on your TV. Just start a video on your phone and it plays on your TV.

If Sebastian Mauer can work out the kinks with Cheapcast, this app could offer the best of both worlds. Folks who want to run a full-blown Android environment on their TV will be able to do that, but you’ll also be able to check the box to start Cheapcast at boot and it’ll work just like a slightly slower-booting Chromecast media streamer.

Mauer is making the source code for Cheapcast available through Github.

Incidentally, the T518 I used to test Cheapcast was sent to me by the folks at W2Comp, where you can buy one for $80. It’s an Android TV stick with a Rockchip RK3188 ARM Cortex-A9 quad-core processor, 2GB of RAM, 8GB of storage, WiFi, Bluetooth, Android 4.2.2, and an adjustable antenna.