Canonical is preparing to make some sort of Ubuntu-related announcement next week. On July 18th the company updated the Ubuntu homepage with a 4-day countdown, a picture of a diagonal line down the center of a black rectangle, and the text “The line where / two surfaces meet.”

While the company isn’t providing a lot of clues to indicate what’ll happen once the countdown hits zero, the folks at Phandroid noticed that Canonical recently filed a trademark on the term “Ubuntu Edge,” which may something to do with the company’s upcoming smartphone operating system.

Update: Some images found on the Ubuntu website confirm that the announcement will be phone-related.

Update 2: Canonical has introduced the Ubuntu Edge smartphone. It’s a device that would dual-boot Ubuntu and Android and function as a desktop PC when plugged into a docking station that connects a mouse and keyboard. It’d have a 4.5 inch, 1280 x 720 pixel display, 4GB of RAM, and 128GB of storage.

The company wants to raise $32 million through crowd-funding platform Indiegogo to build the device, and hopes to deliver the phone in May… if it can generate enough money to make it real. 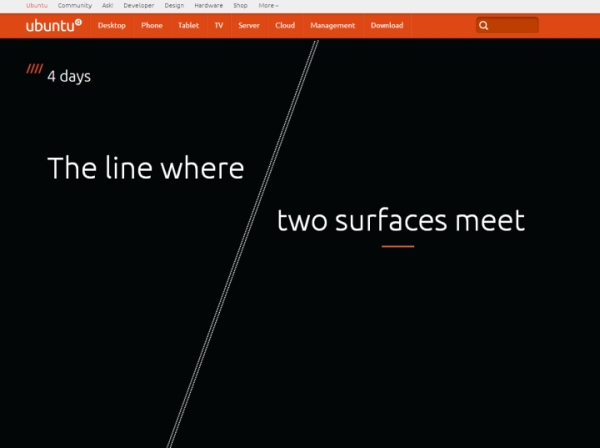 I have no idea what to make of the orange line under the letters “fac” or “ac” or whichever letters it’s under.

The trademark documents mention hardware and software, mobile telephone services, and a few other details that suggest Ubuntu Edge has something to do with the upcoming Ubuntu Phone OS.

While some folks are guessing that this means Ubuntu Edge will be the name of the first smartphone to ship with the operating system, it seems unlikely that Canonical would register a trademark on smartphone hardware. Canonical is a software company that’s attempting to partner with phone makers to load Ubuntu Phone OS on handsets. So trademarks for phone names would likely come from those companies, not from Canonical.

The first Ubuntu Phone OS devices are expected to hit the streets later this year.

7 replies on “Ubuntu Edge: Next week Canonical announces… something”