That’s not necessarily a bad thing, even if you prefer the aesthetics of Android to those of Windows — the Skype app for Android has always been a funny looking app that doesn’t really look like much of any other Android communications app. 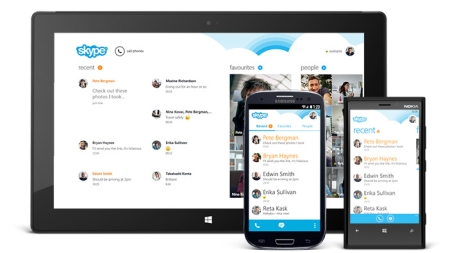 Skype is one of the most popular services for making voice and video calls over the internet, and it’s also a pretty decent app for text chats. The Skype team says the mobile app is currently installed on more than 100 million Android devices.

Earlier versions of Skype for Android loaded a very simple screen at launch, with big buttons for Contacts, recent messages, a dialer, and your profile.

With Skype 4.0, you get more information right away by taking you straight to your Recent view. You can swipe to move to People or Favorite tabs, and you can tap a dialer button from any screen to launch a voice or video call. The new app has also reportedly been rebuilt “from the ground up” to be more responsive.

The new app looks nearly identical to Skype for Windows Phone. The move makes sense, not only because visual consistency across different platforms is generally a good thing, but also because Microsoft bought the makers of Skype a few years ago.

The updated Android app should begin rolling out today.

One reply on “Skype 4.0 for Android gets a Windows Phone-inspired makeover”