Have a phone or tablet with just 8GB of storage and no SD card slot, but want to carry around 16GB or more of music, videos, or other content? A number of companies offer WiFi-capable flash drives or hard drives that let you stream videos and other content to your mobile device.

But the new SanDisk Connect line of products includes models that are smaller and cheaper than the competition. 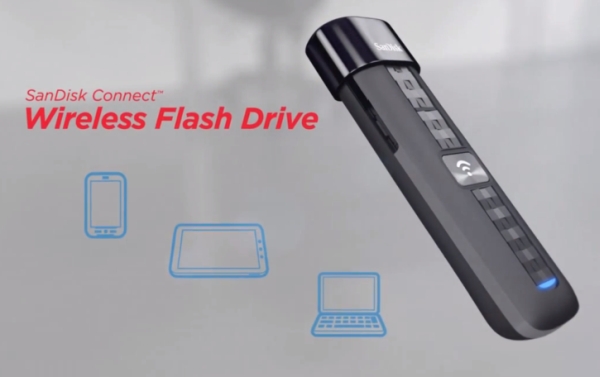 The new SanDisk Connect Wireless Flash Drive is about the size of a slightly chunky USB flash drive, and it works like one. Plug it into a PC and you can copy files to and from the flash drive.

But it also has a built-in WiFi radio and software that lets you pair it with a mobile device using an iOS, Android, or web app.

The company also offers a larger device called the SanDisk Connect Wireless Media Drive. This model offers 32GB or 64GB of built-in storage for $79.99 or $99.99, respectively. But it also has a microSDXC card slot which you can use for extra storage, and SanDisk says this model has a larger battery which should provide up to 8 hours of video streaming time — about twice as much as you get with the Wirelss Flash Drive.

While SanDisk (like other companies), positions these devices as extended storage for mobile devices, there are a few catches. It’s not like media or other files stored on your flash drive will just show up on your mobile device. You’ll need to turn on the wireless drive, pair it with your mobile device, and then fire up an app to access your files.

You’ll also either need to connect both the SanDisk drive and your phone or tablet to the same WiFi network — or connect your mobile device directly to the portable drive over WiFi. That means that you may not be able to actually access the internet on your tablet while it’s connected to the flash drive or media drive.

If you’re just using it to stream a movie or two on a long airplane ride, that might not be a problem. But if you were planning on using the SanDisk drive to store all your important work documents, it could pose a problem.