Google is starting to roll out its new Google Maps app for smartphones and tablets. It has a simpler user interface that puts the maps front and center a center, a new dedicated tablet version for Android tablets, and retires the Google Latitude location tracking service.

The update starts hitting Android devices this week, and it’s coming soon to iOS as well. 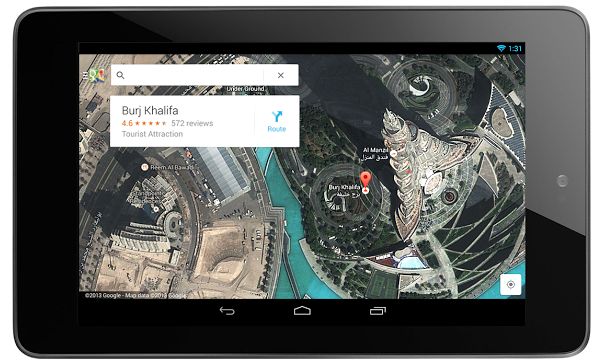 The first big change you’ll notice in the new Google Maps app is that the toolbars at the top and bottom of the screen are gone. Instead, there’s just a search bar. If you need more menu options, you can swipe from the side of the screen to bring them up.

The new look is similar to the redesigned Google Maps app for desktop web browsers, and the UI that’s been available in Google Maps for iOS for a few months.

Google is also adding an Explore feature, which presents information about nearby locations in a Google Now card-style view. You can explorer dining, drinking, shopping, and other locations without even entering a search term just by tapping the search box.

The company is also making use of its recent acquisition of social navigation startup Waze. In addition to real-time traffic status, you can also see reports about incidents on  the road that are submitted by other users. Google Maps will also offer suggestions for alternate routes.

The update also brings a native Android tablet view for the first time, incorporates reviews, Zagat ratings, and coupons and offers for locations.

Google’s location-tracking service Latitude is getting shut down on August 9th, and it’s not incorporated into the new maps app. That means check-ins are also gone.

If you still want to share your location, you can use the mobile Google+ app to do it instead. The feature’s already available for Android, and Google will be bringing it to iOS.

Oddly Google is also hiding the offline maps feature in the new app. Instead of saving a map for use while you’re not connected to the internet from the main menu, you’ll now be able to do it by typing “OK Maps” in the search box to save the area you’re looking at for later.

TechCrunch suggests Google may be burying offline maps because the feature’s not fully baked in this version of the mobile app — although I’m not sure why it’s in there at all if that’s the case. Hopefully a more robust version will be back in the future.

At launch, the new app is also missing custom maps you may have saved in “My Maps.” You can still create them using a desktop browser, but you won’t be able to access them with a mobile app until a later update brings back that feature.