Motorola has launched a sign-up page where you can let the company know you’re interested in more details about the upcoming Moto X smartphone. Unfortunately that’s about all the web page does right now… you enter your email address, and Motorola says it’ll send you some more information at some point.

But the page does confirm what we already knew about the Moto X: It’s a customizable phone that will be designed and built in the United States. 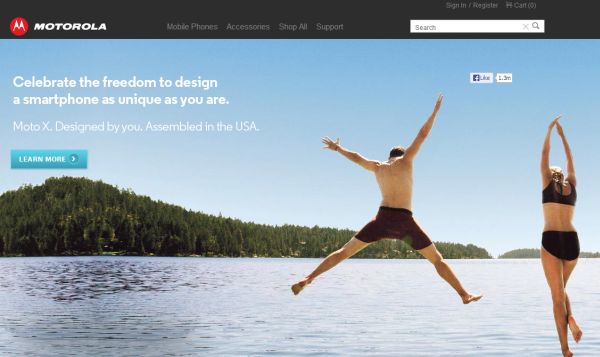 According to the signup page, Motorola expects to have “more than 2000 new employees in Ft. Worth, TX working to make all of this possible.”

Google bought Motorola in 2012, and the Moto X is expected to be one of the first phones released that wasn’t already in the works when the acquisition went through. In other words, it should have a more Google-influenced design than any Motorola device released to date, even though Motorola is continuing to run as a standalone company (there’s no guarantee the company’s phones will be Nexus devices, for instance).

This won’t the the first Google device built in America. The company’s Google Glass wearable devices are manufactured in the US and so was the ill-fated Google Nexus Q media device.

Now if only we knew what the phone would look like, what kind of specs it would have, or what Motorola means when it says it’s a smartphone you can design yourself (rumors suggest a huge range of options for case colors and materials, but hopefully there’s more to it than that).

Update: ABC News reports customers will be able to select a phone color, choose different colors for the back and sides of the phone, engrave names or messages, and even upload a photograph to be used as the default wallpaper when your device ships.

It should only take a couple of days to ship a custom phone.

The phone’s currently being tested with Android 4.2.2 Jelly Bean, but it might be running a newer version of Android by the time it ships. ABC News says built-in sensors will let you use sensors and voice recognition to launch the camera, switch to speakerphone automatically when you’re driving, and do other things without using the touchscreen.