Motorola appears to be prepping a new smartphone called the Droid Ultra. The company hasn’t actually announced the device yet, but a product page on the company website provides a few details.

First, it’s described as a thin phone. Second, it has a “high-grade” Kevlar body which is “tough as steel,” but thinner. Finally, since it’s wearing the Droid name, it’ll probably be a Verizon phone.

And that’s about all we really know at the moment. 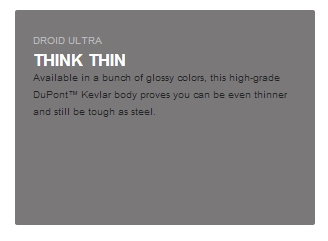 There’s a spec sheet on the website, but the specs appear to have been copied and pasted from last year’s Droid RAZR M. Either Motorola has given up on using new hardware in new phones, or this website is still very much a work in progress.

While nobody sells more Android phones than Samsung these days, Motorola has been an important player in the Android space since the launch of the first Motorola Droid smartphone. I know a number of folks who still refer to Android phones as “Droids.”

Google bought the company last year, but all of the phones released by Motorola since that acquisition have been devices that were already in the pipeline when the purchase went through.

This year we should start to see the first Motorola devices designed by a wholly Google-owned company. It’s too early to say if that means we’ll be seeing stock Android software or other Nexus-style touches.

There’s also been talk lately of a “Motorola X Phone,” but details have been scarce. It’s possible that the line has been re-branded as Ultra in preparation for launch.

According to Droid Life, we could also see a Droid Ultra MAXX with big battery for longer run time.

2 replies on “Motorola Droid Ultra in the works, thin smartphone with a Kevlar body”