LG is holding an event in August where the company’s expected to unveil its next-generation Optimus G smartphone. But we’ve already got a good idea what to expect from the Optimus G2.

Now we also have a pretty good idea what the phone will look like, thanks to a few leaked photos and a video. 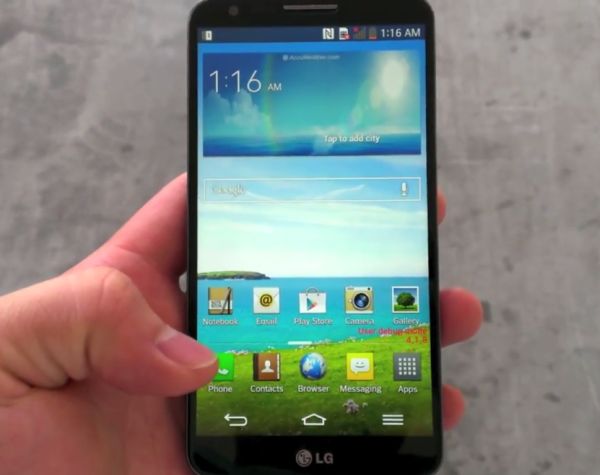 The phone also appears to have a very thin bezel around the screen, so despite the large display, the handset shouldn’t feel much bigger than a phone with a 5 inch or smaller display.

Oddly, LG has decided to move the volume and power buttons to the back of the phone, right below the camera. This might make them easier to reach when holding the phone in one hand, but it’s a little strange that you’ll have to find them by feel most of the time rather than by looking.

The Google Nexus 4 is basically a re-branded LG Optimus G with rounder corners and no 4G LTE. So it’s not a huge surprise that the Optimus G2 looks a lot like the Nexus 4. In the hands-on video you can see that it features LG’s custom version of Android with a special lock screen, app launcher, notification panel, and menu system. Under all the polish, the phone’s currently running Android 4.2.2 Jelly Bean.

You can find more pictures at Engadget.