The HP Split x2 is a notebook with a 13.3 inch screen, 4GB of RAM, and a 128GB solid state disk. Oh yeah, you can also pull the screen apart from the keyboard and use the Split x2 like a tablet. That’s why it’s got “split” in the name.

When HP introduced the Windows 8 laptop/tablet hybrid a few months ago, the company promised it would be available in August for $800.

It looks like things are running ahead of schedule and under budget, because you can already pick up an HP Split x2 from Best Buy for $750. 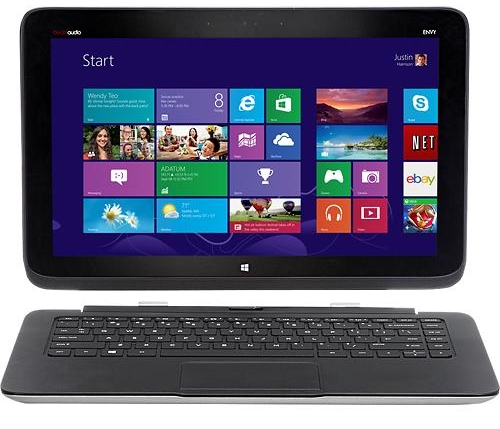 The computer features a 1.4 GHz Intel Core i3 Ivy Bridge processor and a 13.3 inch, 1366 x 768 pixel display. While there are plenty of devices with faster or more efficient CPUs and higher resolution displays, $750’s not a bad price for a device with those specs which can function as either a notebook or a tablet.

Still, I’m looking forward to a day when the only devices with 1366 x 768 pixel screens have 10 inch or smaller displays.

While there aren’t many ports in the tablet section, the base station has an HDMI port, a a USB 2.0 port, a USB 3.0 port, and an extra battery, which should let you use the laptop for longer.

HP does offer a smaller, cheaper Windows 8 notebook with a detachable tablet section. But the 11.6 inch HP Envy X2 has a less powerful Intel Atom Z2760 Clover Trail processor and at $650, it’s only $100 cheaper than the new HP Split x2.