Google is introducing a new device designed to bridge the gap between your laptop, tablet or smartphone and your TV. It’s called Chromecast, and it’s a tiny device that you can plug into a TV.

Once it’s plugged in you can use your PC or mobile device to find a YouTube video, send it to your TV, and use your PC, phone, or tablet as a remote control. But it’s not restricted to YouTube — you can also stream videos from Netflix, Google Play Movies,  or other online video sources.

It is available from Amazon

, Best Buy, and the Google Play Store for $35 and will also be sold at Best Buy and Amazon. 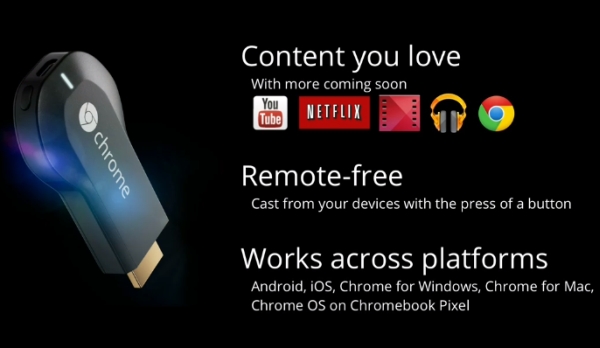 Chromecast runs a simplified version of Google Chrome OS, and connects to the internet over an 802.11b/g/n WiFi connection. Videos are streamed straight from the internet, not from your PC, phone, or tablet.

In other words, while you can use your mobile device to play, pause, control volume, or control other aspects of playback, you can also exit the YouTube app to take a phone call or surf the web and video will continue playing.

Since the Chromecast system is tied to Google Chrome, it’s designed to work with any device that runs Chrome. That includes iPhones, iPads, Android devices, and computers.

What’s nifty about this concept is that you don’t need to buy a Google TV box, an Apple TV, or another internet-connect device to stream online video to a TV. Chromecast is basically designed to take video from devices you already have and send it to your TV.

Developers will need to use the Google Cast SDK to enable support for Chromecast. Right now apps including YouTube, Google Play, and Netflix already use that. But developers can use a new developer preview of the Google Cast SDK for Android, iOS, and Chrome to add support to their existing apps.

Chromecast also supports streaming music from the internet, and Google showed off the device streaming audio from Pandora and Google Play Music.

Google also showed off a work-in-progress feature which lets you send any content from a Google Chrome browser tab on your PC to your television. This lets you send pictures or other content to the biggest screen in your house. The contents of the web page show up on the TV, but not the URL bar, desktop, or other elements of your operating system.

You can even open a new browser tab while the contents of the previous tab continue streaming.

If the concept sounds familiar, Google attempted to so something similar with the ill-fated Google Nexus Q media streaming box. But Chromecast appears to be much more versatile, offering users far more ways to stream content to a TV.

At $35, the Chromecast is also a much more affordable device than the discontinued $299 Nexus Q.

ChromeCast and the Google Cast platform is also Google’s answer to Apple’s AirPlay service, which lets you stream content from an iOS or OS X device to your TV. What makes Google’s solution different is that it’s a cross-platform service that uses your PC or mobile device as a remote control for initiating and controlling playback, but which streams content straight from the internet to your TV.

The Chromecast measures about 2 inches across and weighs 1.2 ounces. There’s also a USB cable and power adapter included in the box. If your TV has a USB port, you won’t need the adapter, but you will need to use the USB cable to power your Chromecast.

Google says the Chromecast device will be the first device to use Google Cast, but the company hopes that the technology will be built into hardware solutions from other companies in the future.

7 replies on “$35 Google Chromecast lets you stream internet videos, music to a TV”