Google’s Chromecast is a tiny $35 device designed to let you stream videos from the internet to your TV. It’s running a modified version of Chrome OS, but you’d never really know that to look at it — there’s virtually no user interface. Instead, when you fire up a video on your phone, tablet, or PC and send it to your Chromecast, the device essentially opens up a browser tab to stream the video or other internet content on your TV.

If you’ve been wondering what kind of hardware it takes to do that, wonder no more. The folks at repair shop iFixit have ripped open a Chromecast to see what lies beneath the 2 inches of plastic. 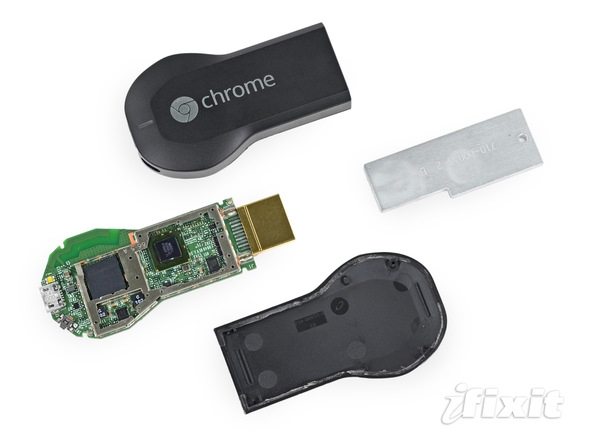 Here’s the answer, in a nutshell:

Normally iFixit assigns repairability scores to the devices it dissects. In this case, there’s not much point. There’s almost nothing you could conceivably replace yourself — aside from the case and heatsink, every component of the Chromecast is physically attached to the system board.

With a price of $35 though, even if you could replace individual components, you’d probably end up spending more on tools and replacement parts than it would cost to just buy a new unit.

If you feel the urge to open up your case though, all you need to do is slide a thin piece of plastic between the two pieces of the case and gently pry it apart.

It’s interesting to note that the device has a Bluetooth chip and 4GB of built-in storage. While that space is basically designed to hold the Chromecast’s version of Chrome OS, I wouldn’t be shocked if someone eventually figured out a way to side-load other operating systems or software. After all, if you can run Ubuntu on a Chromebook, why not on a Chromecast?

While the sole USB port is used as a power supply, theoretically you may be able to tap into the Bluetooth chip to connect a wireless keyboard and mouse.

Of course, then you’ll have to figure out how many Ubuntu desktop apps you can load on a cheap, relatively slow computer with just 4GB of storage and no SD card slot.