Google’s Android is a versatile operating system for mobile devices with support for more than a million apps. But there are some things Android doesn’t do out of the box right now, such as allowing you to make a complete backup of your disk image or blocking advertisements.

Both of those are things you can do on a device that’s been rooted, and there are dozens of other things that you can only do if you first root your device. But the availability of root access on Android devices is sort of a mixed bag.

On the one hand, it’s pretty cool to get complete control over your device. On the other hand, a rooted device is more vulnerable to some security threats than one that hasn’t been rooted — because apps can access portions of the operating system that are normally protected.

So Steve Kondik, the founder of the popular CyanogenMod custom version of Android, is starting to think about ways to minimize the need for root access. 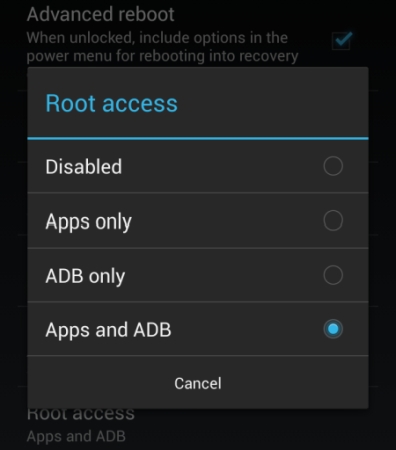 There are no plans to offer a version of CyanogenMod that doesn’t include root… at least not yet.

But if key apps and functions can run without root access, it would make Android a bit more secure.

As Android matures, Google has added a growing number of security features to the platform. As a side effect, this has made it tougher to gain full root access on Android 4.3 than earlier versions, but it also makes it tougher for malware to seriously mess up your phone or tablet or steal your data.

CyanogenMod already offers users the ability to choose how root access works. You can go into the development settings and decide whether root access should be disabled, enabled for apps, ADB, or both.

That will likely continue to be the case. But if developers can work with Android to enable root-like features without requiring root access, it’d be a lot easier for folks running custom ROMs to leave that “disabled” box checked.

Once upon a time, you couldn’t even easily take a screenshot on an Android phone without root access, but now the feature is built into the operating system. Maybe one day support for apps like Carbon and Titanium Backup will also be built in.