A leaked build of BlackBerry OS 10.2 is providing a look at where BlackBerry’s smartphone software is heading. And the future looks kind of good… assuming BlackBerry can keep customers and shareholders placated long enough to actually deliver its next-gen operating system. 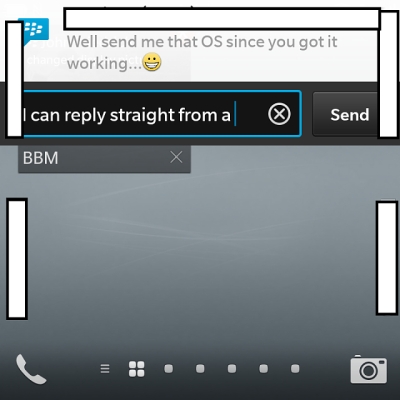 It hasn’t been a good month for BlackBerry. The company’s stock price has been plummeting since last week’s poor earnings report. Sales of new devices haven’t been great. And we found out that the BlackBerry PlayBook table would never get updated to BB10.

But the company is baking some nifty new features into BB 10.2. They may not be enough to help turn the company’s fortunes around, but they should keep some current BlackBerry fans as… fans.

One of the most interesting features is the ability to respond to messages directly from the notification. For instance, CrackBerry forum member Kris Simundson shows a screen where he’s responding to a text message from the text message notification.

As The Verge points out, this would make BB 10.2 the first major smartphone operating system to ship with a quick reply feature. But it wouldn’t exactly be the first mobile OS — CyanogenMod 10.1 has offered a quick reply text messaging feature as part of its custom ROM for months.

Other new features in BlackBerry OS 10.2 include support for WiFi direct, and a native Evernote app.