The BeagleBone Black is a $45 device that you can use as a computer, hardware prototyping board, or a number of other projects. It’s kind of like a cross between an Arduino and a Raspberri Pi.

And it turns out you can use one as the brains of a pretty awesome handheld gaming console.

Max Thrun designed the BeagleBone GamingCape, which transforms the BeagleBone Black into a portable gaming device complete with an LCD display, battery compartment, gaming buttons, a headphone jack, and even USB and Ethernet ports.

The GamingGape has a 320 x 240 pixel 16-bit color TFT LCD display, an analog joystick with 2 thumb buttons, a gyroscope, accelerometer, and magnetometer. It runs on 4 AAA batteries.

Meanwhile the BeagleBone Black brings a 1 GHz ARM Cortex-A8 processor, 512MB of RAM, and 2GB of storage to the party.

Thrun doesn’t plan to mass produce the GamingCape, but all of his designs, including schematics, 3D printers, and software are available from his website. 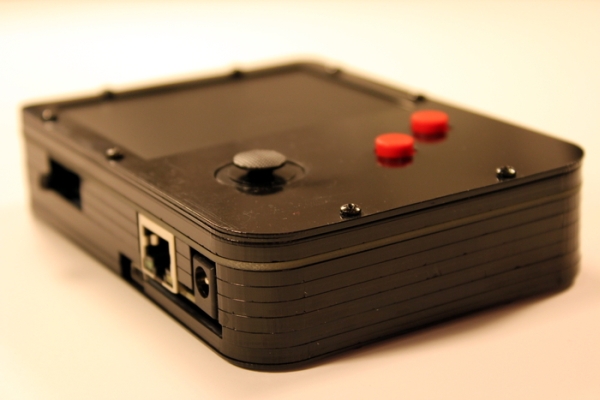 According to his bill of materials, the whole project cost about $162 to build — but it also requires a fair bit of technical expertise.

If you haven’t already clicked play on the video above, I highly suggest you take a look. It’s one of the most exciting DIY hardware videos I’ve seen in a while.