Vizio is now selling the 11.6 inch Windows 8 tablet the company started showing off at CES in January. It’s a tablet with a 1080p display, Windpws 8 software, and an AMD processors.

The Vizio MT11X-A1 is available from the Vizio Store for$600. 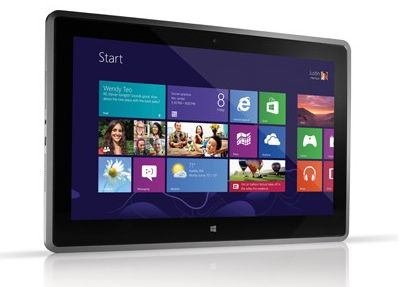 On the one hand, this is one of the few tablets in its price range that offers the full Windows 8 experience and which doesn’t ship with an Intel Atom Z2760 Clover Trail processor. On the other hand, instead it ships with an AMD Z-60 low power processor, a 2012 era chip which is starting to show its age.

AMD’s Z-60 “Hondo” processor is a 1 GHz dual core chip with a TDP of 4.5 watts and built-in AMD Radeon HD 6250 graphics. But it seems a bit odd to ship a tablet with that processor now that AMD’s new Temash chips are available, offering better performance and lower power consumption.

Still, the tablet I played with a CES in January seemed pretty responsive, so the Hondo chip might be all you really need for basic Windows 8 functionality. The tablet also features 64GB of storage, 2GB of RAM, 802.11n WiFi, Bluetooth 4.0, stereo speakers, a 2MP front-facing camera, and a 10-point capacitive multitouch touchscreen.

It has a 33Whr battery which Vizio says should last for up to 5 hours of run time, and the tablet has a micro USB port, micro HDMI port, and a headset jack.