Over the past few years thousands of games have been released for Android phones and tablets. This year we’re starting to see consoles like the Ouya and GameStick designed to put those games on your TV and let you play with a wireless game controller.

But the folks behind the Unu tablet are taking a different approach. They’re releasing a 7 inch tablet which you can use… as a tablet. But you can also plug it into your TV and use it the same way you would a game console that didn’t have its own touchscreen display. 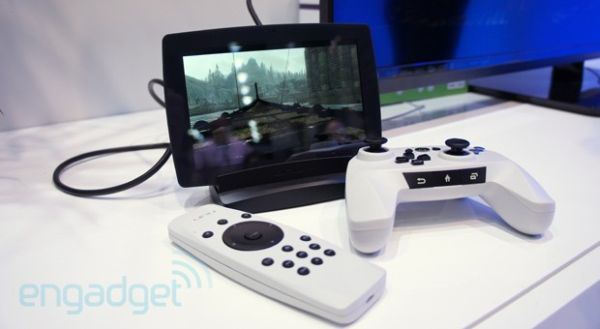 Arguably you could do that with pretty much any Android tablet that supports HDMI output. But the $200 Unu tablet makes the process a little simpler thanks to an included docking station, remote control, and optional game controller.

Technically, the Unu isn’t just aimed at gamers. The company offers a model without the game controller, which you could use to watch online videos, surf the web, or perform some other tasks.

But since the company’s showing off the Unu tablet at the E3 game show this week, it’s not surprising that they’re playing up the $250 Gaming Edition model which comes with the wireless controller and a carrying case.

The folks at Engadget got a chance to check out an early version of the system in action.

3 replies on “Unu Android tablet is designed to plug into a TV for gaming, watching”