But the screen isn’t the only thing that sets the Xperia Z Ultra apart from the crowd. It also has one of the fastest smartphone processors around and a case that’s both waterproof and dust resistant. 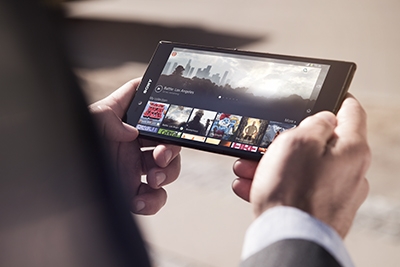 Remember when cellphones used to be the size of your head? And remember how exciting it was when they shrunk down small enough to fit in your pocket?

While it might seem like we’re returning to the cellphones of the 80s, the thing is that you probably don’t hold a modern smartphone up to your face nearly as often as you hold it in your hands. If you use a device to watch videos, play games, shoot photos, read, or surf the web more than you use it to make phone calls, the bigger the screen, the easier it is to do many of those things.

You just won’t be able to do them with one hand unless you have enormous hands.

So it’s likely that big smartphones are here to stay — and it’s likely we’ll continue to see companies pushing the limits to see just how big a screen they can offer. And since these models have bigger screens, there’s also usually space for bigger batteries, which is a nice bonus.

Like some of Sony’s other recent phones, this model can survive a dunk in water and it has a case designed to resist dust, which makes it useful both outdoors and in bathrooms.

It also supports handwriting recognition, although unlike the Samsung Galaxy Note, the Sony Xperia Z Ultra does not have an active digitizer or digital pen. Instead you can use a capacitive stylus or “any pencil… or metal pen.”

The phone’s expected to launch in select markets this summer.