Today AT&T and Samsung officially announced that the Galaxy Note 8.0 with built-in LTE will come to the U.S. When? That’s a question for another day, apparently. The only timeframe mentioned in the formal announcement pegs the release “in the coming weeks” and if you’re the type of person to obsessively parse such things you probably noted that they said weeks and not months. Hooray for the little things. One detail not even hinted at is the price. All we really know is that the LTE-ified version is exclusive to AT&T for now. 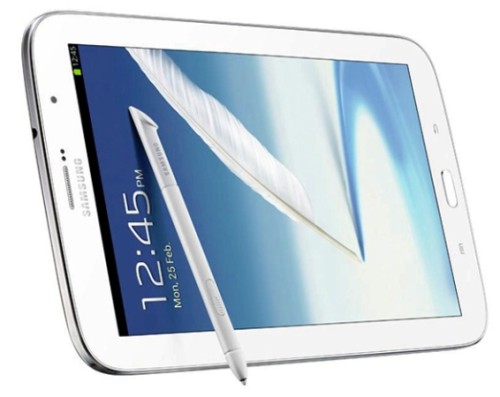 From the press release it doesn’t look like AT&T is bringing much to the table beyond their network, though the Note will probably come pre-loaded with more carrier apps than is strictly necessary.  There is mention of free storage with AT&T Locker (50GB worth) which compliments the 50GB of DropBox storage all Note 8.0 owners already get. The more cloud storage the better since there’s just 16GB on board. That’s expandable by up to 32GB via the microSD card slot.

Given that the Wi-Fi only Note 8.0 is $400, it’s not a stretch to speculate that the LTE version will cost around $530 – $600. The iPad Mini with LTE (the Note’s closest competitor) starts at $460 at AT&T if you go month-to-month, which is $130 more than than Wi-Fi version. The extra money is all for the LTE radio, and they tend to be expensive. However, Samsung may surprise us by not adding too much on top of the price for those who want LTE goodness at all times.

The Galaxy Note 8.0 itself is a sweet little tablet that features an 8-inch display with WACOM technology to work with the included digitized stylus. It fits into the sweet spot between full-size tablets like the Note 10.1 and the oversized phone/tablet like the Galaxy Note II. As an avid journaler and note-taker, I like this size more than the larger version. If you’re a Samsung fan in general the Note 8.0 has all the stuff you’d expect: TouchWiz skin, multi-window for productivity, Samsung accounts, services, and apps, and even an IR blaster for remote control of your TV and entertainment center.

If the LTE version ends up costing more than $500, is it still a good value? If you’re really into the pen/stylus thing for taking notes and drawing, then yes. If you’re not, you’re probably not as interested in the Note 8.0, anyway. (The Galaxy Tab 3 8.0 is probably more your speed.)

AT&T’s DataConnect plans start at $14.99 for 250MB/month with just two other tiers: $30 for 3GB and $50 for 5GB. Not the greatest price structure, but at least AT&T has a cheap plan for those who just want emergency juice. Unfortunately, these plans do not include mobile hotspot. Keep in mind that AT&T’s LTE network doesn’t cover every major city just yet. The carrier is dedicated to rapid expansion, but check the coverage map before rushing out to buy the AT&T version.

Feeling meh about AT&T’s plans? Keep in mind that Samsung often releases their tablets on Verizon Wireless as well, though usually many months later. Verizon’s tablet plans do include mobile hotspot, so there’s that.

Hopefully the “coming weeks” won’t stretch out into months. In the meantime, check out Brad’s hands-on with the Wi-Fi version.