Unfortunately the rest of the specs look like they were ripped from a 2011-era phone. 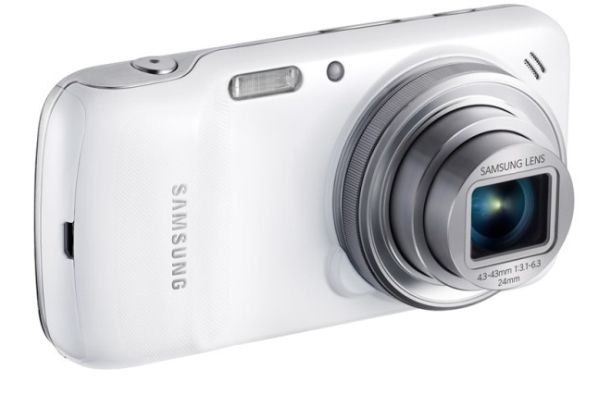 The coolest thing about the Galaxy S4 zoom is the camera. It has a 16 megapixel sensor, optical image stabilization, and a flash bulb. But what really makes it stand out is the 10x optical zoom.

Most smartphone cameras only support digital zoom, which invariably leads to awful, grainy-looking photos. The Galaxy S4 zoom lets you actually re-position the camera lens as you zoom.

That makes the device a bit bulkier than a typical smartphone. But it’s pretty slim by camera standards, and noticeably thinner than the Samsung Galaxy Camera, another Android-powered camera from the Korean electronics company.

While the Samsung Galaxy S4 phone has a 5 inch, 1080p display, a quad or octa-core processor, 2GB of RAM, and 16GB or more of storage, the Galaxy S4 zoom’s specs are a little less impressive:

In addition to the 16MP rear camera, there’s a 1.9MP front-facing camera. The rear shooter can snap up to 4 pictures per second in continuous mode, and Samsung includes software that lets you automatically find the best photo in a set, take HDR photos, and apply a range of settings and effects.

Basically, the phone is designed for people who don’t want to have to carry a phone and a camera, but who aren’t satisfied with the cameras included on most handsets.

It’s an interesting idea, and a kind of attractive one if you’ve taken a few too many pictures that looked great on your phone’s screen, but which looked awful when you blew them up on your 1080p monitor at home.

But it’d be nice if the Galaxy S4 zoom had some of the other features found in its namesake including a full HD display or enough built-in storage to actually store a good number of 16MP photos.