The Samsung Galaxy NX is basically an updated version of the Galaxy Camera, but it can shoot photos with higher pixel counts and you can swap out the lenses depending on your needs. 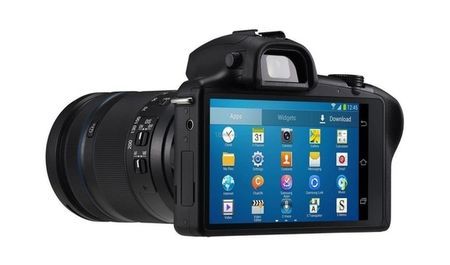 It works on HSPA+ and 4G LTE networks, which means you can upload photos to Facebook from pretty much anywhere. It also supports GPS and GLONASS, 802.11n WiFi, and Bluetooth 4.0.

You can also run Android apps to edit your photos or videos, play games, surf the web, or what have you. You also get Samsung’s TouchWiz software and apps including Samsung’s music, voice, translation, and chat apps.

The camera has 16GB of built-in storage and 2GB of RAM. It also has a microSD card slot for up to 64GB of additional storage.

If you don’t need interchangeable lenses and would rather just have a camera that fits in your pocket, Samsung also recently introduced the Galaxy S4 Zoom, a smaller device with a built-in camera featuring a 10x optical zoom.