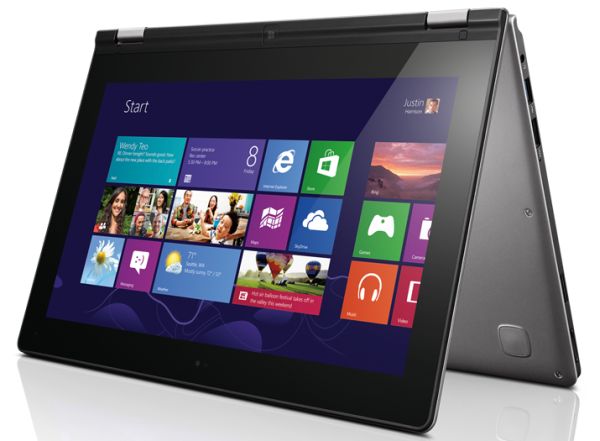 Lenovo’s third member of the Yoga family is a laptop that bends over backward to become a tablet. Basically you can lift the lid and use the computer in notebook mode — or keep pushing the screen until it goes back nearly 360 degrees and rests below the keyboard so you can hold the system like a tablet.

The first Yoga tablet had a 13.3 inch screen, the second had an 11.6 inch display but ran Windows RT. This is the company’s smallest full Windows 8 model.

The Acer Iconia W3 is the smallest Windows 8 tablet released to date. It has an 8.1 inch, 1280 x 800 pixel display and it’s powered by an Intel Atom Z2760 Clover Trail processor.

Acer’s little tablet has 2GB of RAM, 32GB of storage, a 2MP front-facing camera, and offers up to 8 hours of battery life.

Unfortunately when I got a chance to play with the Iconia W3 recently, I was underwhelmed by its speed and the screen’s viewing angles.

Interestingly, Staples sent out a press release to let us know that the Iconia W3 was now available in-stores, but I don’t see any mention of it on the company’s website at the moment. Office Depot, however, is selling the Iconia W3 for $350, which is about $30 less than the tablet’s list price.

Update: The Iconia W3 is now available from Staples for $350 as well.