A handful of smartphone makers including Sony and ZTE have announced plans to launch phones running Firefox OS this year. Now Taiwanese equipment maker Foxconn is also showing off the first tablet running the Mozilla’s operating system with an emphasis on web apps. 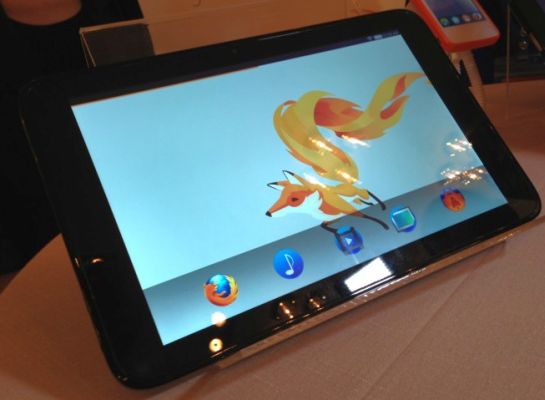 Foxconn and Mozilla held a joint press conference in Taiwan, where the companies talked about how they would work together to optimize Mozilla’s software to run on Foxconn-built devices.

While Foxconn isn’t exactly a household name, the company manufactures products for many better-known companies including Apple, Acer, Dell, and others.

So while Foxconn and Mozilla say they’re working together on at least 5 devices right now (including the tablet), it’s not clear what brand names those devices will actually be sold under.

For its part, Mozilla says that while Firefox OS is initially aimed at mobile devices such as phones and tablets, it’s an open platform that could power a wide range of devices, including smart TVs or digital signage.

Unfortunately we still don’t know who will actually sell the first Foxconn/Firefox tablet, how much it will cost, where it will be available, or even what kind of processor the tablet uses. But one of the key features of Firefox OS is that it’s designed to run well even on devices with relatively slow processors and limited amount of memory.