Another company is getting ready to launch a video game console designed to let you run Android games on a TV. Gaming accessory maker Mad Catz plans to show off its Project M.O.J.O. console at the E3 show next week, and hopes to release the small video game system by the end of the year.

Mad Catz is entering an increasingly crowded space. Other Android-based game systems including the Ouya, GameStick, and GamePop consoles are all expected to launch this year. 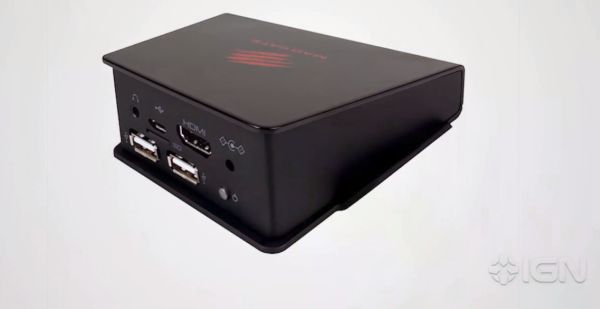 Perhaps the biggest difference between those devices and Project M.O.J.O. is that Mad Catz doesn’t seem to be all that interested in running its own game store. Instead, customers will be able to buy games from existing stores such as Google Play or the Amazon Appstore.

In other words, Mad Catz plans to make its money on hardware, not software. And that could be good for users, since it means they’ll be able to access thousands of games and apps that are already available for Android instead of a curated selection.

It also means that you’ll be able to play games you’ve already purchased on a phone, tablet, or another device.

Mad Catz says its line of GameSmart Bluetooth controllers, as well as a keyboard, mouse, or other peripherals. The final hardware specs haven’t been established, but according to an IGN preview, the Project M.O.J.O. system will likely have at least 16GB of storage, a microSD card slot, HDMI, WiFi, Bluetooth, a headphone jack, and 2 USB ports.

It’ll likely have a latest-generation processor such as the NVIDIA Tegra 4 chip and ship in the fourth quarter of 2013.