Google has yet to officially launch the next version of its smartphone and tablet operating system. But Android 4.3 has already been spotted in the wild — and now a leaked build for the Samsung Galaxy S4 Google Edition is available for download from SamMobile.

You can also grab the system dump.

It’s probably just a matter of time before the software is unofficially ported to run on other devices — but keep in mind, this is unofficial software, installing it might void your warranty, and you could break your device. 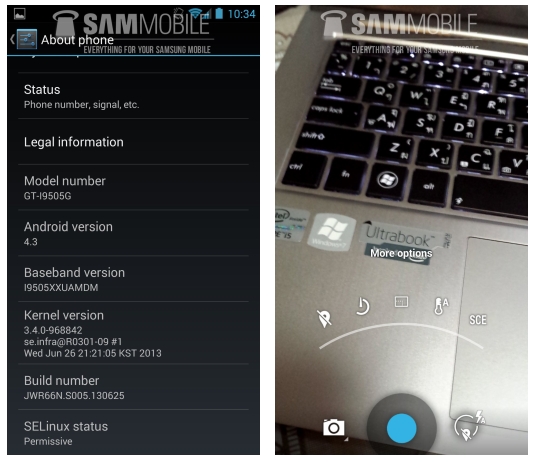 With those warnings out of the way, here are some of the things that are new in Android 4.3:

If there are more changes, they’re likely under the hood and tougher to spot. It’s no surprise that Android 4.3 is still code-named “Jelly Bean,” since it appears to be a minor software update at best.

Update: After digging around a bit, folks have uncovered a few more changes in Android 4.3.

Keep in mind, it’s also possible that this ROM is a fake… I mean, it’s certainly a real ROM. People have installed it. But it might not really be Android 4.3 so much as a cleverly modded version of Android 4.2.2.

Google recently started offering standalone versions of many core Android apps through the Google Play Store, which lets the company push updates to the Gmail, Calendar, Play Music, Play Store, and even keyboard apps without releasing a whole new version of the operating system.

That doesn’t mean we won’t see OS updates anymore. But they might not be as important these days as they were a few years ago when the only way to update the core Android experience was through the launch of a new version of the operating system.

This is generally good news for folks who don’t install custom ROMs or buy Nexus phones, since it means you don’t have to wait for your phone maker or wireless carrier to modify and/or approve updates before you get new features.

But for custom (and stock) firmware enthusiasts, it looks like the era of Android 4.3 is upon is, whether Google meant for it to start today or not.

3 replies on “Leaked build of Android 4.3 for the Samsung Galaxy S4”