There are plenty of dual-core Android set top boxes out there that sell for less than $130, so what is it that makes the folks at iPazzPort think the Pearl can command that kind of premium? It’s the rechargeable remote control and built-in charging dock. 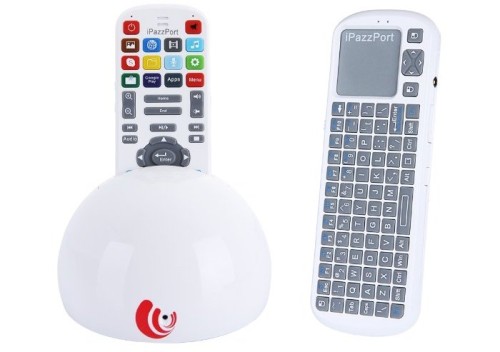 iPazzPort has built a number of Bluetooth mini keyboards and pointing devices, but it hasn’t ventured into the set top box market before. It makes sense, then, that its first kick at the can would be designed around the remote control. As you can see, it’s a dual-sided remote with a full QWERTY keyboard and trackpad on the back and a more traditional TV-style layout on the front. Hotkeys provide fast access to apps like Skype and Facebook — as well as Google Play, YouTube, and the Android settings screen. The remote also has a built in microphone and speaker.

That’s all fairly standard stuff. What makes this one different is the charging contacts on the bottom edge. There’s a remote-shaped cutout in the top of the semi-spherical Pearl that lets the remote slide in to charge up its internal 400mAh battery.

As for the Pearl itself, it’s built around a 1.6GHz dual-core Rockchip RK3006 processor. It packs 1GB of RAM, 4GB of storage with micro SD expandability, 802.11b/g/n Wi-Fi and Ethernet, two USB 2.0 ports, and an HDMI output. There’s also a built-in webcam — that’s it peeking out from inside the swirling red accent on the front.

Geekbuying has the iPazzPort Pearl in stock for $129.99, but you can find it a few dollars cheaper elsewhere. Over on AliExpress you can score one for about $110. 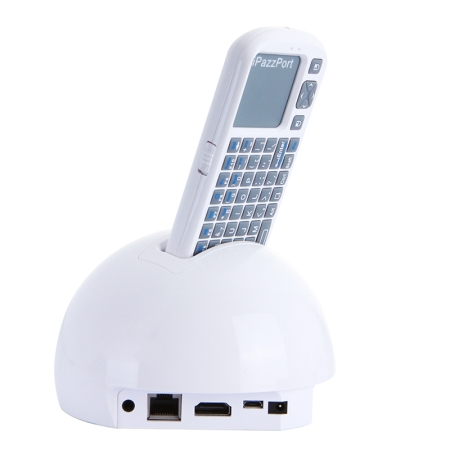