Samsung says its ATIV Tab 3 is the thinnest Windows 8 tablet around, and measuring about 0.32 inches thick, you could easily mistake this for an Android or Windows RT tablet.

But thanks to the Intel Atom processor, you should get up to 8.5 hours of battery life and the ability to run virtually any Windows app (just don’t expect resource intensive apps to run well).

Under the hood, then ATIV Tab 3 is a lot like the Samsung ATIV Smart PC tablet the company released in 2012. But the new model has a smaller screen, it’s thinner, lighter, and comes with Microsoft Office 2013 Home & Student preloaded. 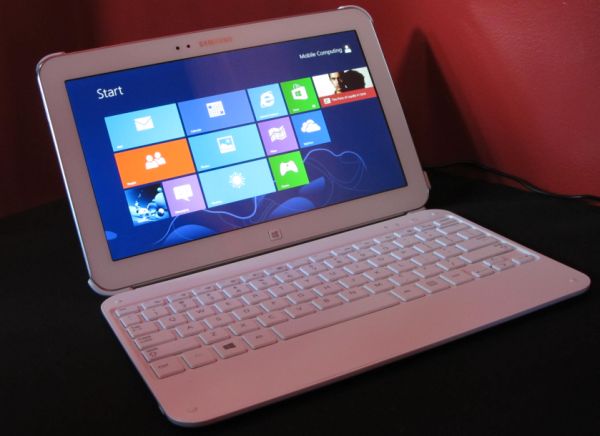 Weighing about 1.2 pounds and measuring about 0.32 inches thick, the tablet’s pretty slick for a Windows 8 device. But it’s expected to ship with a keyboard cover which protects the tablet, but also makes it a bit thicker and heavier to carry around.

There’s a digital pen which tucks away into the corner of the tablet when you’re not using it. When you do need it, you can use the pen for pressure-sensitive input. It lets you write or draw on the screen, or hover a cursor over on-screen menus, icons, or other items — something that’s difficult to do with a touchscreen alone.

In the few minutes I got to play with the ATIV 3, it felt more responsive than last year’s model. It’s hard to say if that’s due to hardware or software tweaks, since it basically has the same processor, screen resolution, and memory as the older model. But Samsung may have put things together better this time around or simply tweaked the software to improve performance.

Either way, when you add the pen and keyboard, this starts to look like a pretty nifty portable device that you can use as a tablet or a notebook (as long as it’s propped up on a desk — the case isn’t going to work as well on your lap — although the case is sturdy enough to prop up on your lap if you’re careful).

The demo unit I tinkered with didn’t have Office 2013 installed, so I can’t say how well that software runs, but like other Windows 8 devices with 10 inch or smaller screens, the free Office software will be one of the key selling points for the ATIV tab when it launches later this year.

Unfortunately the Samsung ATIV 3 costs about twice as much as an old-school netbook. It’s expected to launch in August for about $699.