Dell is taking a page out of Lenovo’s book with its latest convertible tablet. The Dell XPS 11 is a notebook that you can use as a tablet — and you convert it into one the same way you would a Lenovo IdeaPad Yoga. Just push the lid back 360 degrees so it’s resting opposite the keyboard and the notebook becomes a tablet.

But the Dell XPS 11 has a few tricks that Lenovo’s Yoga computers don’t. 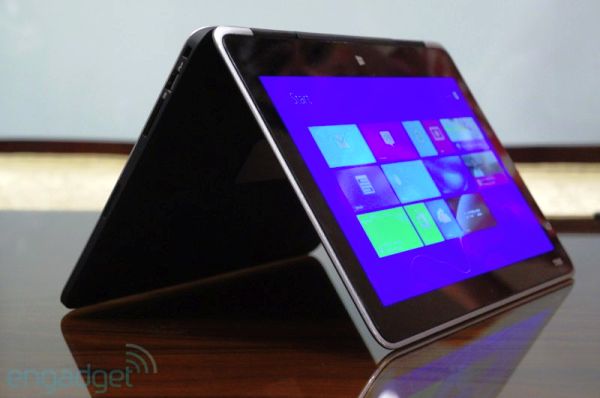 The XPS 11 also features an active digitizer which lets you use a digital pen for pressure-sensitive writing, drawing, or other actions such as making a cursor hover over an item without actually tapping/clicking it.

Dell’s XPS 11 will also ship with an Intel Core i5 Haswell processor, while the Yoga line comes with Ivy Bridge or NVIDIA Tegra chips (although I expect it won’t be long before Lenovo updates the CPUs in its convertibles).

While a convertible laptop with a screen that you can’t detach is usually going to be thicker and heavier than a detachable model, the XPS 11 has a carbon fiber case which helps keep it relatively thin and light.

It measures less than 0.6 inches thick, which isn’t all that bad for a tablet. The 2.5 pound weight is pretty good for a notebook, but rather hefty by tablet standards.

When the screen is opened more than 180 degrees, the keyboard is deactivated so you won’t accidentally find yourself hitting keys and entering gibberish when using the machine in tablet mode.

Engadget reports the flat keys on the keyboard also don’t feel particularly funny when you’re holding the tablet, since they don’t provide any travel at all. That makes typing in notebook mode a little unusual, but Engadget suggest the keyboard provides more tactile feedback than you’d get from a Microsoft Surface Touch Cover since the keyboard offers some haptic feedback when you press a key.