The Cubietruck is an upcoming mini-computer with a dual-core ARM Cortex-A7 processor, up to 2GB of RAM, Gigabit Ethernet, and WiFi and Bluetooth built in.

While it’s not the most powerful device of it’s type, the Cubietruck does have a few tricks up it sleeve, including out-of-the-box support for both Google Android and Ubuntu Linux. 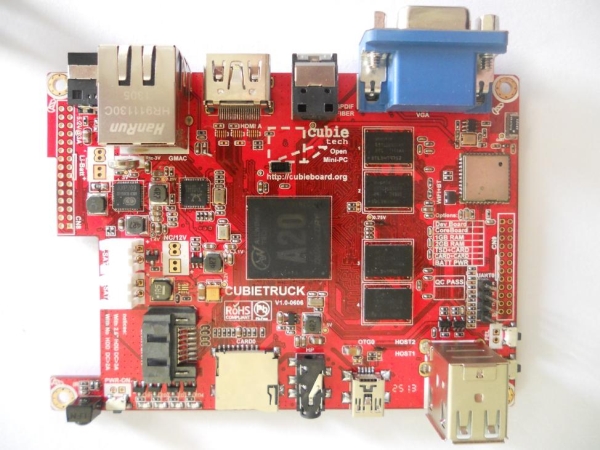 Over the past year or two we’ve seen dozens, possibly hundreds of tiny desktop computers with ARM-based processors hit the street. Sure, most of them are sold as media boxes that let you connect your TV to the internet and stream online video or play games, but essentially they’re tiny, cheap computers.

And some are designed to be just that. The Raspberry Pi, for instance, is a $35 PC board with an ARM11 processor and support for open source software including versions of Debian and Fedora Linux.

The makers of the Cubieboard figured they could do better, and released a tiny PC last year with a faster CPU , more memory, and more ports. This month they launched a new model with an even faster, dual-core chip.

Like the Cubieboard, the Cubietruck is essentially a PC-on-a-board, which means it won’t come with a case. You can buy or build your own. At 4.3″ x 3.1″ the new model is a bit bigger than a Cubieboard, which provides more room for input and output ports and space to build a case that can hold a 2.5″ hard drive or solid state disk. 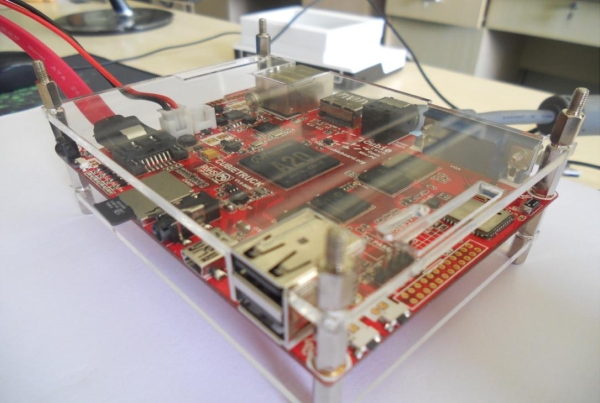 The system has a microSD card slot, 2 USB ports, HDMI and VGA ports, a headphone jack, a SATA 2.0 interface, and extended pins which you can use for programming, debugging, or connecting peripherals.

Cubiesteam hasn’t announced a launch date or price yet, but you can find more pictures at the team’s website.

17 replies on “Cubietruck is a small, open source mini PC with an Allwinner A20 dual-core CPU”