The Cubieboard is a tiny computer that’s about the size and shape of a Raspberry Pi, but which features more memory, built-in storage, and a few other goodies that the Raspberry Pi lacks. 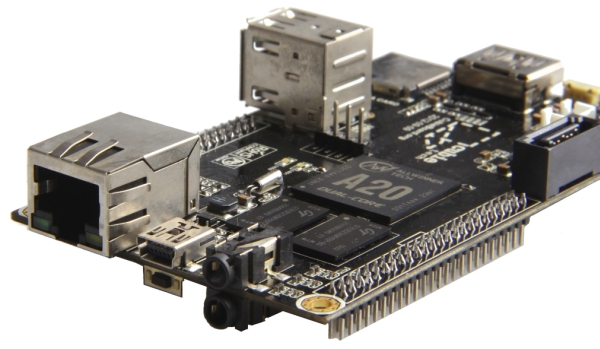 The Cubieboard2 sports an Allwinner A20 ARM Cortex-A7 dual-core processor with Mali 400 MP2 graphics. The new chip happens to be pin-to-pin compatible with the A10 chip.

That allowed the makers of the Cubieboard to upgrade with minimal fuss — so the new board looks a lot like the old one, and features the same basic specs, including:

The device doesn’t feature built-in WiFi, and doesn’t come with an operating system loaded, but you can connect a USB WiFi dongle and load Android, Ubuntu 12.04, or other Linux distributions yourself.

While it’s not the most powerful ARM-based mini PC around, it’s a hacker/developer friendly device and it’s one of the few devices of its type that officially supports both Android and Linux.