BlueStacks is adding another Android-based video game console to its lineup, even before the first model hits the streets. Recently the company unveiled the GamePop, a $129 device that lets you play Android games on the big screen by paying a $6.99 subscription fee to access an all-you-can-eat buffet of games.

Now the company is introducing the GamePop Mini, a smaller model which will be available for no additional charge when you sign up for a 12-month subscription. If you return the device before your first year is up, you pay a $25 restocking fee. 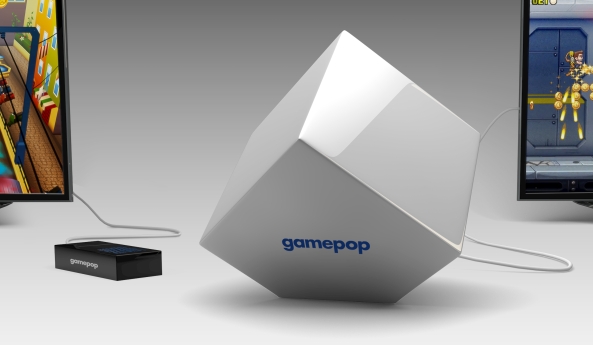 BlueStacks still hasn’t actually told us what kind of hardware is in the $129 version, so it’s tough to say exactly how the “free” version differs. But the GamePop and GamePop Mini both differ from other Android-based video game consoles like the Ouya and GameStick in a few ways.

First, rather than buying individual games, you pay a subscription to play as many games as you like. This isn’t a Netflix-style streaming service. Games will be downloaded to your device and you can play them at any time. But stop paying your subscription fee, and the GamePop system will be useless.

Second, BlueStacks got its start by making Android games run on Windows PCs. Using similar technology, the company is promising to enable support for iOS apps on Android. You won’t be able to access every game in Apple’s App Store, but iOS developers will be able to offer their games to GamePop subscribers without first porting them to Android.

At launch, BlueStacks says games from 500 developers will be available.

The GamePop mini goes up for pre-order on July 1st from GamePop.tv. The $129 GamePop is already available for pre-order. Maybe the company will tell you what differences exist between the two devices next week.