AT&T just announced the official pricing and release date for the LTE version of Samsung’s Galaxy Note 8.0 and it’s a bit of a surprise. The Note 8.0 will cost $399, the same price as the Wi-Fi version, if you sign a two-year contract. That’s an unusual move for AT&T. The carrier usually sells tablets for an unsubsidized price and allows customers to pay for data on a month-to-month basis. Lately AT&T has backed off on that, encouraging customers to sign up for contracts with discounts on tablet prices. The unsubsidized option is likely to be available as well, though I couldn’t confirm the price since the Note isn’t on AT&T’s website yet and might not be until the on sale date: June 21. 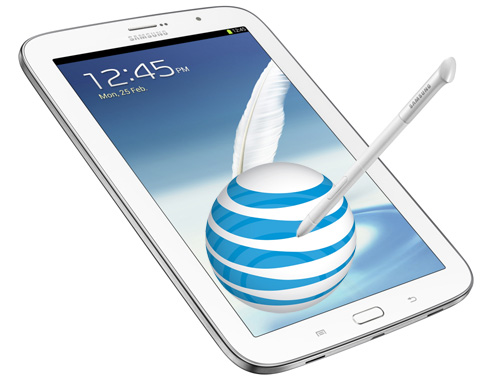 Signing a two year contract for a tablet might not be all that appealing. AT&T is hoping customers will be more willing to do so if they also sign  up for phone service. If you buy a Galaxy S4, Galaxy S4 Active, or Galaxy Note II phone, you can get the Note 8.0 for $199. $400 all together for a phone and a tablet is a pretty good deal if AT&T’s service is decent in your area. Just be aware of what you’re getting in to.

The press release doesn’t go into details about plans, but it’s likely that AT&T will want customers who take advantage of this bundle to sign up for a shared plan. If you do, it will cost you $95 per month for 1GB of space between both devices. The next step up is 4GB and that will cost $120 per month. The least you will pay per month with a non-shared plans is $75, and that’s for less than 1GB of data per month between both devices. The data choices on AT&T aren’t the greatest.

Aside from that issue, the Galaxy Note 8.0 is a pretty sweet Android tablet. Getting it for just $200 is pretty tempting, especially if you’re a fan of the S Pen or of smaller tablets. Having speedy mobile data available at all times is especially useful for an 8-inch tablet that is more likely to leave the house than a 10-inch one. Personally, I would hesitate to tie myself to a carrier for a tablet. With mobile hotspot on my phone, my Wi-Fi tablet has the connectivity it needs. I know some people think of that as a hassle, though.

Would you sign a two year contract to get a discount on this (or any) tablet?