The folks behind the XBMC media center application have made a lot of progress porting the software to run on Android. But if you’d rather have a small, low-power XBMC box that runs on Linux, new options might be available soon.

Pivos Technology’s XIOS box can run Android or Linux, and there are XBMC builds available for both. Now developer j1nx has managed to get the Linux version of XBMC to run on a different media box with a similar processor. 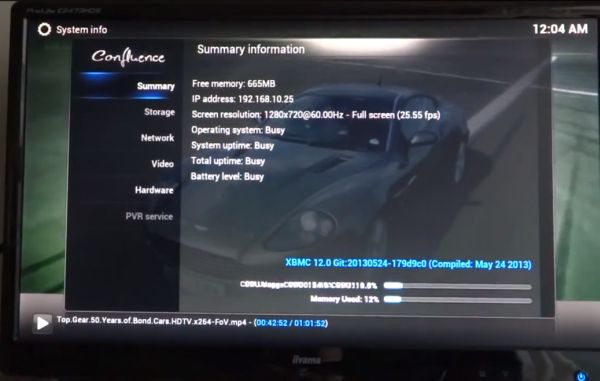 The Geniatech ATV1200 features a 1.5 GHz Amlogic AM827s-MX dual-core processor, 1GB of RAM, and a wide range of input and output options. It sells for around $100 and up at AliExpress.

J1nx hasn’t yet released his software to the public, but he’s posted a demo video showing it handling 720p HD video playback at 30 frames per second with relatively low CPU usage. Meanwhile he’s able to navigate between on-screen menus quite easily.

There are a few reasons you may prefer a pure Linux build of XBMC to the Android version. The first is ideological: while Android is based on open source software, Google’s core operating system isn’t a community-driven project the same way that many Linux distributions are. You can modify the source code for most versions of Android… but only after Google’s done with it and releases it to the public.

Another is that you could theoretically configure a light-weight Linux distro so that it boots directly into XBMC and doesn’t run much other software at all. This could make for a device that runs (and shuts down) more quickly.

I’m also not convinced that the Android builds of XBMC are quite as zippy or as well-supported as versions for other platforms… at least not yet. I’ve tested XBMC on a number of Android-based devices and it generally doesn’t seem to be quite as responsive as the version shown off in the demo video by j1nx.

Hopefully his work will make it easier to get XBMC up and running on even more set-top-boxes with AM8726-MX chips… or other devices featuring different ARM-based processors.

At the very least, this should be good news for the development of the upcoming TheLittleBlackBox project. That’s a €100n open-source media box designed to run XBMC which is backed by a team of developers including j1nx.